Verdasco rolls in first round at Moselle Open 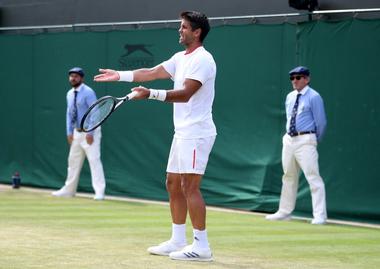 Fifth-seeded Fernando Verdasco of Spain cruised to a 6-2, 6-2 win over Belgium’s Steve Darcis on Monday in the first round of the Moselle Open in Metz, France.

Verdasco saved the only break point he faced in the 68-minute match.

Sixth-seeded Mikhail Kukushkin of Kazakhstan defeated Italy’s Jannik Sinner 6-3, 7-6 (4) thanks to superior returning on the key points. Kukushkin converted three of his five break-point chances while Sinner cashed in just two of his 11 break opportunities.

Seventh-seeded Adrian Mannarino of France dumped Italy’s Stefano Travaglia 7-5, 6-2 in a rematch of a French Open first-round matchup this year that Mannarino captured in five sets.

Attila Balazs won the last two games of a suspended match to send Hungary to a 3-2 series win over Ukraine and a berth in next year’s Davis Cup qualifying round.

Balazs led Illya Marchenko 6-4, 5-5 on Sunday when play was halted due to darkness in Budapest, Hungary. Marchenko squandered a set point Sunday just before the suspension.

On Monday, Balazs got the first service break of the set for a 6-5 lead, then needed three match points and staved off a break point to serve out the match.