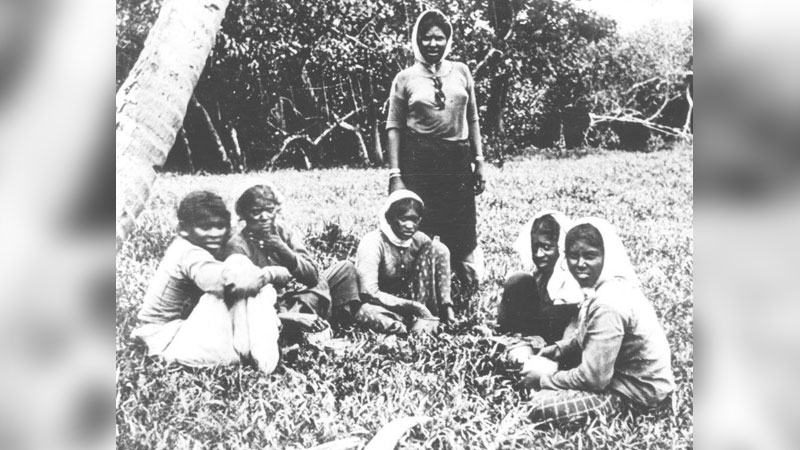 During the colonial days, there was something called the ‘Fiji Blue Book’.

It was a directory of sorts, containing a list of all government appointments.

This week’s Discovering Fiji story is centred on a name entered in the Fiji Blue Book belonging to a female called Parbotti.

Her real name was Padam Kaur.

According to Google search results, she was the Female Warder at Suva Gaol from January 1, 1898 to 1901.

The 1898 Fiji Blue Book ‘s section 14 was dedicated to paid employees of the Prisons Department. Parbotti was one of 12 paid workers of the department.

The Fiji Blue Book further says she was remunerated with an annual salary of 12 pounds. In the year 1898, this would have been quite an achievement.

Kaur (later called Parbotti) arrived in Fiji with her husband, Ram Chander, on June 27, 1885 in the ship, SS Ganges.

The couple had travelled from the Indian subcontinent for more than three months and were lucky to be alive when their ship sailed into Suva. Fifteen others who had sailed with the couple had died during the 74-day voyage.

Their first footstep on Fijian soil was on Nukulau. Then the island acted as a reception and quarantine station.

After days of medical checks, Kaur and Chander were assigned to work with 35 other men, 14 women and three children. They were allotted to Charlie Chalmers of the Penang Estate in Rakiraki.

They sailed to Rakiraki by barge and arrived at Washington Wharf, Nanukuloa, where Chalmers and his sardars were waiting to receive them. Chalmers’ head sardar was Budhia, a ‘tall Rajput with a bushy moustache’.

From Budhia, Kaur and Chander learned they were required to wake up at 3.30am, have an hour to bathe, breakfast and cook their lunch. They were to leave for the sugarcane fields with their sardars who would then give them their tasks.

Kaur and Chander lived on the end of one of the coolie lines. Their room was a standard 10 ft by seven ft, with a door but no windows. Amenities included three bunks and a fire-place for cooking.

The floor was the naked earth.

“It must have been an unwelcome sight even for those who had known poverty in their home,” the book, Fiji: A Love Story (Memories of an Unconventional Diplomat) noted.

In general, life in Fiji’s plantation was a struggle. But nothing was more difficult than backbreaking work the Indian couple were required to do and sometimes, the ill-treatment they received from their sardars and fellow girmitiyas.

The sardars, who were ‘freed’ men, wielded control over their labourers and often were ‘the worst exploiters of their countrymen’. Their treatment of women was notably cruel.

But Kaur and Chander were lucky to be labourers at the Penang Estate compared to other plantations around Fiji where leaders were cruel and conflicts were rife.

This was because their head sardar, Budhia, was a ‘humane’ and ‘just’ person, a trait rarely found among people in his position in estates around the country.

Labourers were paid on Saturday afternoons and Kaur and Chander earned one shilling and nine pence per task. This did not include rations and passage back home.

On holidays, they were engaged to do more work, if available. Otherwise, they would organise wrestling bouts, play musical instruments and sing, and even take part in Ramayan reading sessions.

After spending some time in Fiji, Chander and most of his friends, started liking the cultural drink, after acquiring the taste for yaqona, Kaur worked hard to keep the home habitable and respectable.

She covered the earth floor with a coat of clay mixed with cow dung, the knowledge of which she had learnt while growing up in her own village in Jaingara, in the Agra district of Uttar Pradesh.

Three years after arriving in Fiji, the couple welcomed a son on April 10, 1888.

To mark the prestigious occasion, traditional Hindu ceremonies associated with birth were performed with the blessings of a priest and a feast was organised.

There was much merry making and the newborn was named Biri Singh. However, Biri ‘got corrupted to Bere in Fiji records’ and Bere Singh became his name.

During the identured system, the plantation where girmitiyas worked was a place where many rifts and discord developed to destroy the unity and happiness the labourers had.

Budhia’s good nature prevented such petty intrigues from fuelling extreme cases of antagonism and rancour but he was later transferred to another plantation and was replaced by sardar Dost Mohammed who was indifferent to Chander and Kaur.

Tragedy hit when Chander and his close associate, Bhanchand were blamed for a fire in June 1890, just a few weeks before his contract expired.

The fire destroyed a small section of the sugarcane field and completely gutted the house of sardar Mohammed.

Chander and Kaur were sleeping in their room when the fire started.

Chander and Bhanchand were arrested and taken to Ellington wharf a few days later and put on the boat called Adi Rarongo.

Their trial was held on July 18 and 19, 1890 and they were found guilty of arson and sentenced to 15 years of penal servitude, a few days before their indenture period was supposed to have ended.

While Chander was serving his term sardar Dost ‘directed his anger and frustrate at’ Kaur and her cousin Narain back at the plantation.

However, a group of labourers who were their friends made a plan to protect the two women ‘against any mischief’.

“The majority of other workers at the plantation, who had previously remained neutral, recognising the monstrous injustice, also became sympathetic to Padam Kaur and Narain,” Fiji – A Love Story noted.

“They kept a close eye to ensure that Padam Kaur was constantly protected. In addition they helped her complete the unfairly large task allotted to her each day by Dost Mohammed.”

The protection given to Kaur by friends who were concerned about her safety made Mohammed the sardar frustrated. So he decided to bully Narain instead.

One day Narain was blamed for stealing a box but she was defended by workers at the plantation. As a result there was a lack of evidence and therefore charges against Narain were dropped.

Such defiance of the powerful sardar was now possible because most of the labourers who had arrived together with Kaur her husband Chander on the SS Ganges had finished their labour contracts.

They were getting ready to leave the plantation and return home or find a new life in Fiji as free men. At the same time, a new lot of labourers had arrived in Fiji on May 17, 1890 aboard the ship, ‘Allanshaw’.

They were to replace those leaving the plantation, who would no longer ‘be at the mercy of’ sardar Mohammed’.

Again, another rumour emerged in the Penang plantation that Kaur’s ‘safety was at risk’ and that a conspiracy was ‘being hatched against her’.

Kaur had already decided that she would go to Suva once her indenture period was over and be closer to her husband Chander who was imprisoned at the Suva Gaol.

Her friends advised her to leave for Suva immediately on completing her girmit contract. The exact date of her departure was kept a secret to prevent Mohammed from thwarting any plans of her travelling to Suva with her infant son (Bere).

During his time at the plantation, Chander was respected among the labourers. Now that he was in prison, he was replaced by a person by the name Badri Maharaj, a young 20-year-old ‘Garhwali who had just arrived in the ‘Allanshaw’.

“He was literate, physically very strong and of kind disposition. These qualities made him a natural leader,” Fiji – A love story quoted.

Maharaj was an Indo-Fijian farmer, politician, and philanthropist. He was the first Indian member of the Legislative Council and served for two periods between 1916 and 1923 and 1926 to 1929
Through his own hard work he became a successful farmer. He was the first Fiji Indian to realise the need for schools for children of the girmitiyas and at his own expense he founded the Wairuku Indian School, near Rakiraki, in 1898. The school was the first Indo-Fijian school to be established in Fiji and still exists today.

One of the famous Fijians who attended the school was Ratu Sir Lala Sukuna.

A century after their indenture, Chander and grandson, Bhagwan Singh and Maharaj’s son would form a very close relationship. Bhagwan and his son Ajay Singh, would both return to Fiji as Indian High Commissioners . The latter would author Fiji:A Love Story (Memoirs of an Unconventional Diplomat)