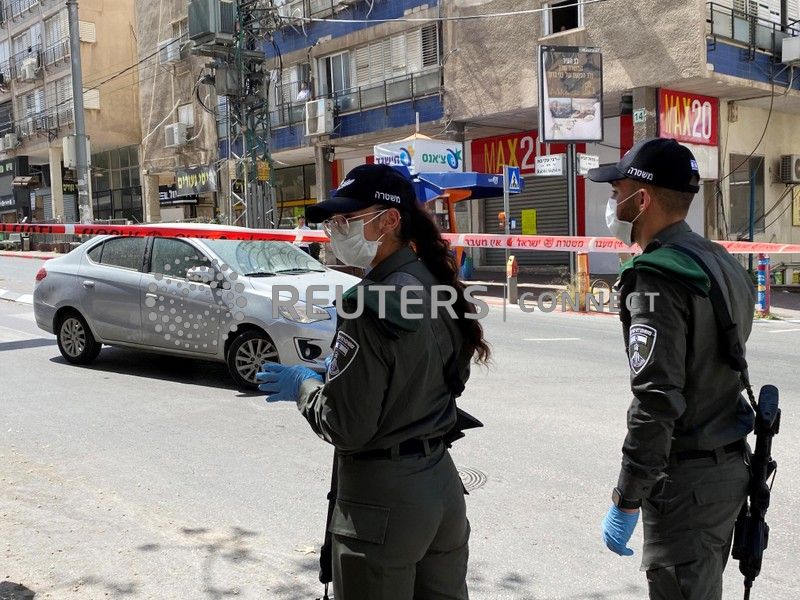 Israeli police stand guard at the entrance to the town of Bnei Brak as they enforce a lockdown of the ultra-Orthodox Jewish town badly affected by coronavirus disease (COVID-19), Bnei Brak, Israel April 3, 2020. REUTERS/ Ilan Rosenberg

BNEI BRAK, Israel (Reuters) – Israel put up roadblocks on Friday to seal off an ultra-Orthodox Jewish town badly affected by the coronavirus, but ordered in soldiers to support the residents.

Police units, wearing surgical masks and gloves, moved swiftly early on Friday to cordon off major intersections around the town and enforce the new rules.

“Bnei Brak is on lockdown, as of this morning, and police will prevent any movements in or out of the city,” police spokesman Micky Rosenfeld said. “People are only allowed in or out for medical reasons or medical support.”

Netanyahu’s office later said the military would help the town council provide services to citizens, but not help to enforce the closure. The army said it would provide food, medicine, and any other assistance that was needed.

Israel has confirmed at least 38 deaths linked to the coronavirus and over 7,000 infections – but medical experts estimate that as many as 38% of Bnei Brak’s 200,000 residents are infected.

Bnei Brak’s population, many of them choosing study of scripture and traditional large families over a more worldly lifestyle, often live in very close proximity to one another in impoverished neighbourhoods. Some have heeded rabbis who, out of distrust for the state, spurned anti-virus measures.

With the elderly especially vulnerable to the illness, the military plans to evacuate 4,500 people aged 80 and above and place them in isolation in requisitioned hostels.

Since Tuesday, some 600 soldiers have been supporting police across Israel in enforcing strict stay-at-home orders, which have forced many businesses to close and sent unemployment over 24%.

In the Israeli-occupied West Bank, Palestinian President Mahmoud Abbas on Thursday night extended a state of emergency for a second month, to early May.

The renewed measures meant schools would remain closed, movement between cities would remain prohibited and citizens would continue to be required to mostly stay at home, Prime Minister Mohammad Shtayyeh said in a speech on Friday.

Palestinians there have reported one death and 181 cases of COVID-19, with 12 additional cases in the Gaza Strip.

Reality of the matter … Fiji government revenue to drop by $1.5bn; 500 businesses could file for bankruptcy

We thought too big, Renault says as it axes 15,000 jobs in cost-cutting reboot