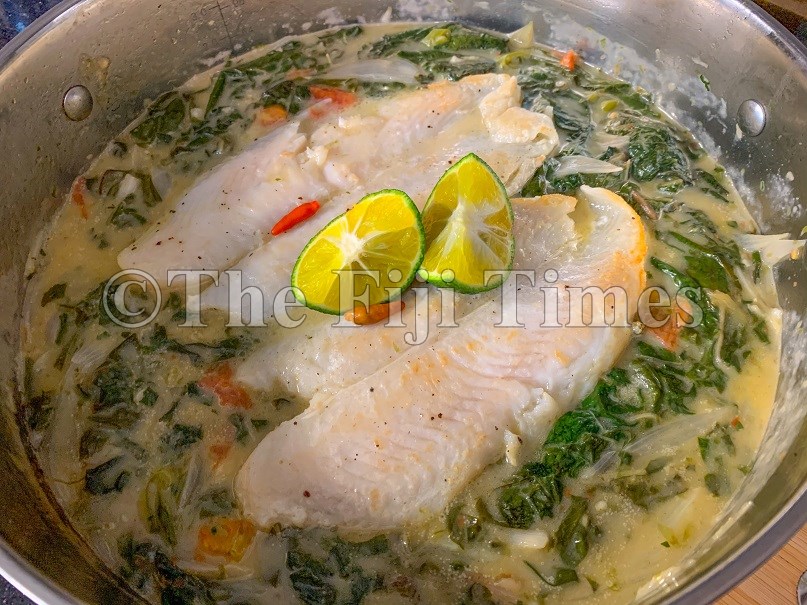 Chef Lance Seeto’s home cooking TV series has returned to the airwaves in a timely season that promotes local superfoods to boost our health in the battle against viruses and disease.

When Fiji’s ancestors first arrived at Viti by canoe, they brought with them plants for food and medicine that had sustained their civilization for thousands of years. The “canoe plants” were said to include many of the staple vegetables, fruits and medicinal roots that are still integral to the traditional iTaukei diet today. They included sugarcane, bamboo, coconut, yams, breadfruit, noni, layalaya, yagona, taro and taro leaves. Rourou, as we know them in Fiji, take longer to prepare than most green vegetables but once you know the techniques for cleaning and choosing the best leaves, the medicinal benefits of this ancient superfood can be enjoyed just as the iTaukei ancestors once did.

Taro leaves, or rourou, is also known as elephant ears or by its Latin name colocasia and is native to southeastern Asia and the Indian subcontinent. Whilst we think of taro and taro leaves as Pacific island food, the plant has been cultivated in Asia for more than ten thousand years, predating South Pacific civilization and appears in ancient Greek and Roman cuisine around the 1st century and early Indian cuisine. It is indeed a very ancient plant that has developed its own defences from insects and herbivores from eating it. The plant contains an irritant which causes intense discomfort to the lips, mouth and throat. This acridity is caused in part by microscopic needle-like raphides of calcium oxalates. It must be processed by cooking, soaking or fermenting – sometimes along with an acid like lime or tamarind – before being eaten.

Like all superfoods, taro leaves have a wide range of health benefits that have long been forgotten. The ancient civilizations who ate the leaves probably did not understand why they were so healthy; they only knew it helped keep them alive. With access to the internet, we can now learn why superfoods like taro leaves are so beneficial to our health. They are high in antioxidants; help boost your immune system and are good for digestion. The leaves are said to naturally reduce cholesterol and inflammation and help control blood pressure. They are good for your eyes too. Taro leaves are also high in potassium, a crucial mineral that helps sustain the body’s fluid as well as electrolyte balance. And if old-age wrinkles worry you, taro leaves have a high content of an amino acid known as threonine, which apparently supports formation of collagen and elastin which are crucial for healthy skin.

Not just a pacific food

Taro leaves is a popular vegetable used widely in Pacific Island cooking and paired mostly with creamy coconut milk in palusami and curries. We see it in rourou moci with shrimps and many villagers love it cooked with tinned beef or fresh fish. It pairs well with ginger, garlic, onion and meats such as chicken, fish, beef, pork, chickpeas, sweet potato and tomatoes. Taro Leaves are extremely popular in India. The mature Leaves are used to make a snack while the tender leaves are cooked into a curry in Maharashtra, Goa, Karnataka and the other three Southern States of Kerala, Tamil Nadu and Andhra Pradesh. This vegetable is especially popular in Indian wedding and pooja menus as well as being relished on vegetarian days.

In the next episode of Exotic Delights, I prepare the popular Indian snack seina, or taro leaf rolls. I love the blend of spice and nuttiness of the dhal spread that make seina a perfect plant-based snack. Also known as alu vadi, seina is a typical dish from the Indian province of Maharashtrian. Basically, the colocasia leaves are spread with an aromatic paste and then tightly rolled up. The rolls are then steamed until tender and the toxins removed, cut into pieces and lightly pan fried until golden brown. I’ve enjoyed many versions of seina here in Fiji, but I find that a mistake that most make is they deep fry the
seina in processed oil, making them too oily for my liking. Watch as I prepare the taro leaves in a traditional way but instead of deep frying them, I gen- tly pan fry them in healthier oil like virgin olive or coconut oil. The taste and texture is the same but you don’t get that mouthful of high-cholesterol oil.

This ancient plant has had more than 10,000 years to develop a defence against begin eaten, and it works very well. The itchiness experienced comes partly from microscopic shards along the leaf but also a chemical inside the leaf that makes it impossible to eat raw. The tiny needles can be seen when you hold the leaf up to light and you will see them shine like sparkling light, and the bigger and older the rourou leaf, the bigger the needles. To reduce the chance of itchiness, rourou leaves need to be cooked for at least 45 minutes to dissolve the needles and kill any toxins. I was always taught to cook the leaves uncovered too, as it allows the dissolved shards and chemicals to evaporate in the air as steam. This is another reason why after boiling rourou in water, many people strain and rinse the cooked leaves again
before adding them to coconut milk. So choosing the young baby leaves will ensure the needle-like shards will be small, but boiling them for at least 45 minutes will help dissolve them. This critical step in preparing rourou leaves will ensure that you get the health benefits of this ancient superfood –without the itch.