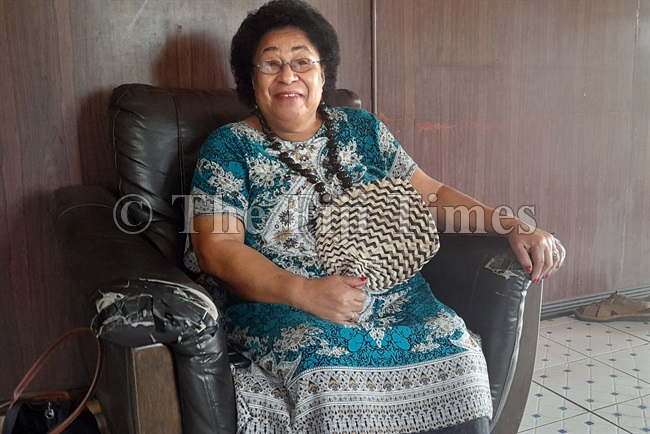 Unaisi Lekenaua clinged to her faith in God and her favourite Bible verse in Psalm 23:4 as she was wheeled into the operating theatre at the Labasa Hospital.

The retired schoolteacher said Psalm 23:4 “Even though I walk through the darkest valley, I will fear no evil, for you are with me, your rod and your staff they comfort me” gave her the strength and courage she needed to undergo cancer surgery.

The Moala, Lau woman who lives in Wailevu Village, Labasa, was diagnosed with breast cancer in November, 2019 after she detected a lump under her left armpit which proved positive after a biopsy was conducted.

“When I felt the lump, I told my husband about it and he encouraged me to go to hospital for further medical examination and confirmation from doctors,” the 70-year-old said.

“I did that and in January 2020, the doctors informed me of a positive result and because I know them personally, it was not easy for them to break the news to me.

“It was an emotional moment for me but their support and advice got me through those challenging months.”

The doctors advised her to undergo surgery while the lump was still small.

Three months after that consultation on March 31, Ms Lekenaua was wheeled into the operating theatre and had the lump removed.

“They removed the lump and a day later I was discharged from the hospital and being an iTaukei woman, I also turned to herbal medicine after my surgery.

“I went to villages and got it massaged and drank medicine for it but it didn’t change my situation.

“So I kept in touch with the doctors and they kept advising me about things to do and even eat the right type of food to aid my recovery.”

Since then, Ms Lekenaua said, she had been travelling around the country and was “not feeling sick at all”.

“They had called me back in March this year for another check to see whether the cancer cells have spread in my body.

“I did go back and I had a CT scan done and they saw cancer cells in my body but very small so they suggested for chemotherapy.

“But at my age of 70, I chose not to go through chemo. If God decides to take me home early then let it be but I won’t go through another medical treatment because I believe that it’s my faith in God that has enabled me to celebrate my 70th birthday last month.”

Ms Lekenaua said she believed that family support played a vital role in ensuring her recovery was swift and without incident.

“We need to always remain positive and trust in God because that’s how I have journeyed this far. I also believe the great support from the best medical team in Labasa Hospital has helped me a lot.

“Keep reading God’s word and believe in it because he is the God who heals and I believe he will bless me with many more years.”