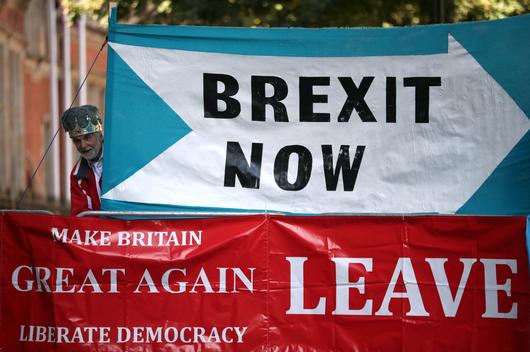 A protester, wrapped in British Union Jack flag, is seen outside the Supreme Court of the United Kingdom, in London, Britain September 18, 2019. REUTERS/Hannah McKay

LONDON (Reuters) – Boris Johnson’s decision to suspend parliament is not a matter for judges and was not done for improper reasons, a lawyer for the prime minister said on Wednesday as he sought to persuade the British Supreme Court the five-week shutdown was lawful.

Johnson asked Queen Elizabeth to prorogue, or suspend, parliament from Sept. 10 until Oct. 14, prompting accusations from opponents that he wanted to silence the legislature in the run-up to Britain’s exit from the European Union on Oct. 31.

The Supreme Court, Britain’s top judicial body, began three days of hearings on Tuesday to decide whether Johnson’s advice to the queen regarding the suspension was unlawful.

A ruling against him would be a major embarrassment for Johnson, who has no majority in parliament. It could see lawmakers, a majority of whom oppose Johnson’s promise to leave the EU even if no deal has been struck, returning early, with more time to try to influence his Brexit plans.

“We have got here the Mother of Parliaments being shut down by the father of lies,” said Aidan O’Neill, the lawyer for about 75 lawmakers who are among those challenging the suspension.

“Rather than allowing lies to triumph, listen to the angels of your better nature and rule that this prorogation is unlawful and an abuse of power,” he said in a passionate appeal to the court’s 11 judges.

They will have to decide whether it is right for them to interfere in the prorogation decision and if so, whether the decision and length of the shutdown was unlawful. Their ruling is expected on Friday at the earliest.

James Eadie, a lawyer for Johnson, said the ability to prorogue parliament was a matter of politics or “high policy” which was non-justiciable, meaning it was not something on which judges could rule.