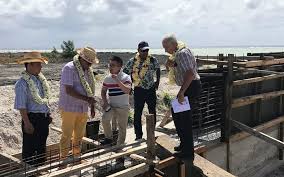 French Polynesia’s president Edouard Fritch says he has no date for when the Chinese company Tahiti Nui Ocean Foods will start work on its planned fish farm on Hao.

Speaking on local television after visiting Hao, Mr Fritch said his government acceded to the requests for the renewal of the construction permits after the company added a new project partner.

While he had been told the launch of the project was imminent, he would not suggest any date and would wait like everybody else, he said.

In August, he hoped for it to be started before the end of 2019.

Initially forecast to cost $US1.5 billion and employing 10,000 people, the fish farm has for years been delayed as Tahiti Nui Ocean Foods kept amending its plans.

Critics say the proposed fish farm is neither economically nor environmentally sustainable.

However, the company’s head said last year he wanted to partner with a UN agency for the project to conform with high environmental standards.

While in Hao, Mr Fritch laid the foundation stone for a 20-unit social housing complex.