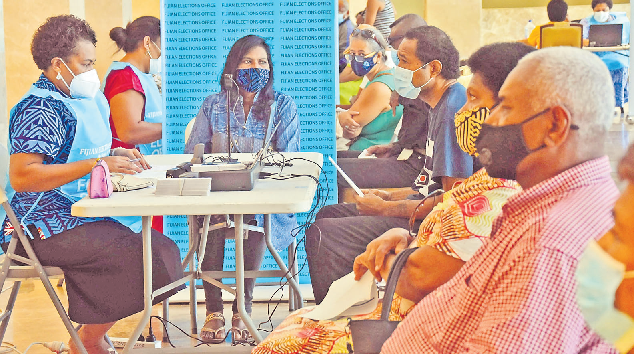 Members of the public register for their voter cards at the Suva Civic Centre in Suva on Friday last week. Picture: JONACANI LALAKOBAU

We desperately need a prudent and experienced economic leader that will give us hope that we will solve the crisis we are currently facing and once again live in peace and prosperity.

We desperately need to protect our government finances to avoid falling off the cliff and inflicting untold misery on our people. If you feel the frustration and fear in this beautiful island nation as I do, let me tell you that you are not alone. There are numerous of us praying for the day of our salvation and the restoration of our lives.

Lately, there is never a day that goes by in this paradise without government planning to protect itself. The laws are being amended without prior consultations. The Bills are rushed through Parliament with the abuses of the Standing Orders.

The control by the people of their resources are being slowly diluted. The electoral laws are being changed to make it harder for the political parties to raise funds or to comply. There is confusion on the election ID cards. The list goes on.

The people of this beautiful islands suffer silently. There are laws that prevent dissent, association and expression, all in the false name of unity. People have been sacked for declaring the truth. Scores of senior civil servants have resigned because of the way they are ignored and treated. The independence of the institutions that safeguard integrity and accountability have been destroyed.

We must refocus the national vision back, towards us, the people. We must celebrate our diversity and not suppress it. We must clean up nepotism. The only way that we can change our future and those of our children is for the opposition parties to defeat the FijiFirst party in the 2022 election which may be only six months away.

In a war, it is a foregone conclusion that the side who commands superior weaponry will defeat its opponents especially if the opposition are fighting individually with very little resources. For the opposition parties to win next war, they must stand shoulder to shoulder under a common strategy with their combined resources, ready to counter every battle tactic that our opponents will throw at us.

People are shouting at the opposition parties that it is time to come together so we can reclaim our destiny. Through the following questions, I will answer some of the reasons for this movement for change.

What are the benefits of a unified opposition?

Therefore, the discussion to unify the opposition parties has been going on for eight years. These unity discussions, although unsuccessful so far, reflect the huge benefits of unification which include the following:

 The pooling of human and financial resources. Money is everything in a campaign. The resources of individual opposition parties are tiny compared to with the FijiFirst party which, as the incumbent government, also have access to government services and resources. Combining these resources increases many fold the chances of the opposition parties winning the 2022 elections. In addition, the unification will catalyse more resources as donors have more confidence of a change in government.

 It avoids opposition parties attacking each other which unfortunately is already happening. This plays right into the hands of the FijiFirst party and uses resources which can be better applied to attacking the common enemy.

 The fielding of a strong lineup of candidate. Combining the candidates will increase the confidence of the people that the opposition parties will form a strong and capable government. It has similar impact as the concept of a Government of National Unity. This may convince those that did not vote in 2018 to vote in 2022.

 Lastly, a united opposition front reduces the risks that they will individually face in 2022. These risks include the noncompliance to the requirement of the laws of the election and the tactics of the Fiji First Party to discredit individual parties. In summary, the benefits of unification are overwhelming. The only thing it lacks is political will. I believe that after many failed attempts, we now have political will to unite.

One of the major reasons for the failures of past attempts to unify the opposition parties was that no-one spearheaded the movement. We have now solved this by creating a coordination office. The office will sit outside the political parties to encourage neutrality and inclusivity.

The coordinator will consult with all parties to prepare the framework and the mechanism that will be acceptable to everyone and make unification a reality before the 2022 elections.

Is the invitation to participate in the unification process open to every opposition party?

Yes, the invitation is open to every opposition party. I stress again that we are not forming a coalition as yet. The is to all opposition parties to bring their views to the table, whatever these maybe. With goodwill and a strong commitment to the national goal of changing the government, we are confident that we can find common grounds to reclaim Fiji.

How will the leader and candidates of the unified opposition party be chosen?

The choice of a leader and candidates are very important decisions. We must make these decisions collectively. While the three parties have some ideas, these issues will be discussed and resolved by the consultations that have now started.

Why not unite after the elections?

What if the bigger parties say that they can win by themselves?

All parties are hoping to do better in 2022 than they did in 2018. But I caution this optimism because we do not know what the common enemy has up its sleeves. In my reading of the unfolding chain of events, the 2022 elections will be totally different than 2018. The opposition parties must therefore be prepared for the unexpected. And to those that are separating parties into sizes, I wish to stress that the 2018 elections is now history. The sizes of political parties that matter will be those determined after the 2022 elections.

To conclude, in my view, Fiji’s politics are at an important crossroads. Up to now, political parties have largely been created and administered very much along ethnic lines. Our political alignment is therefore along ethnic lines. I passionately feel that we must now chart a new pollical vision for Fiji.

The country will only achieve lasting national unity when political parties integrate and unite. This is a golden moment in our history which the opposition parties should grab with both hands and come together. Not only will the opposition parties change government, we will also change history. We will start the important road to unifying all ethnic groups. Wouldn’t this be a stronger platform to begin a new chapter in Fiji’s history? 

SAVENACA NARUBE is the leader of Unity Fiji and former Governor of the Reserve Bank of Fiji. The views expressed in this article do not necessarily reflect the views of this newspaper