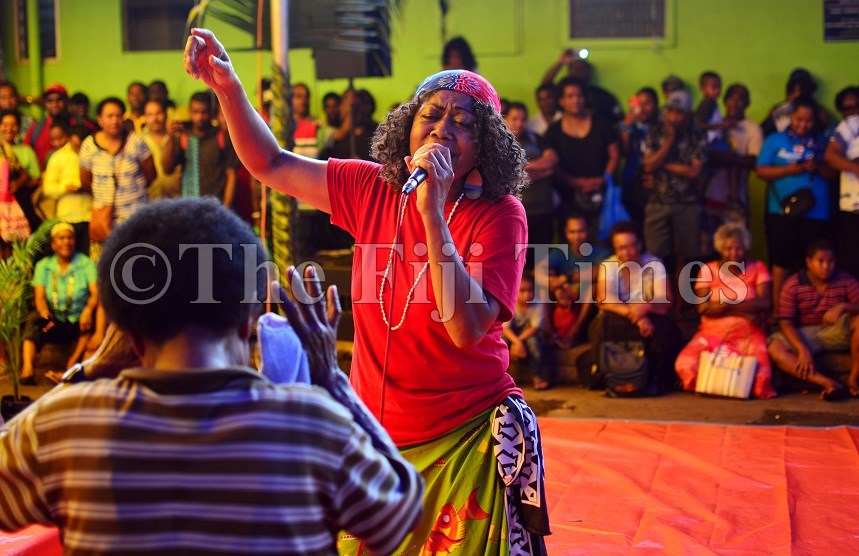 Fiji’s Vude Queen has just turned 60, an age where many would think of retirement and slowing things down. That would work for the masses, but it certainly doesn’t for Laisa Vulakoro.

If the past few weeks were anything to go by, Vulakoro appears to have received a second wind.

The Yacata, Cakaudrove, lass has just received a real estate certificate and plans to do that “on the side”, she has also been in the studio working on releasing four new songs and she is doing this while working on collaborations with some of Fiji music’s biggest artists.

Vulakoro has 16 albums under her belt in a career that began in the ’80s and continues to today.

As a live music performer, she knows no equal, she has the ability to light up the stage – whether it’s an intimate setting or an outdoor event in front of hundreds.

Her list of hits are endless, from Sitiveni released in the ’90s right through to her biggest release ever, Na Jule Ni Hanahana and the more recent Bitu Kavoro, Vulakoro has a knack for writing catchy iTaukei tunes that Fijians easily identify with.

And while her songs appear to be “fun” tunes, they often have stories behind them. Case in point her latest tune Isa Tau My Sweet Papadum, Oh Yum.

“A lot of people will just hear the title and go ‘oh no, what’s this about’ but once they know the whole story, they will have a chuckle,” she said.

Vulakoro said the song was inspired by Luke Ravuwai Ratavua, the executive chef at the Peninsula Hotel.

“He makes the best papadums in the whole of Fiji, hands down.

“And every time I go to the Peninsula, he always serves up a basket full of the crunchiest and best papadums, and it is always accompanied by a steaming hot cup of coffee.

“After visiting the hotel a number of times, I told my tau Luke that I was going to write a song about him.

“Then COVID-19 happened and he thought I had forgotten.

“So when I came by and told him the song had been written, recorded and released, he couldn’t believe it. “I was sick of all the kavoro and rosi songs on the radio.

“So I composed Isa My Tau, My Sweet Papadum, Oh Yum because I wanted to do something very different.

“And I believe that’s what a good song should do – it should be able to tell a real story in a fun and humorous way.”

For Mr Ratavua, being able to serve up a dish for one of Fiji’s biggest music artists was a dream come true.

“I have been listening to her music all my life and to finally meet her here and prepare her a meal that she likes was amazing,” he said.

“And to have a song written about me is something else. The Bau, Lomanikoro, native said many of his friends and family found it hard to believe the Vude Queen had composed a song about him. “I think that’s what makes Laisa stand out as an artist, she walks the talk and she is in touch with the ordinary people.”

The music for Isa My Tau, My Sweet Papadum, Oh Yum was composed by Vulakoro with music by another renowned iTaukei artist, Marika Nakete and produced by George Waisile, also known as “Thunder”.

The song features a rap by Sitiveni Vereakula, better known as Stee from Youngblood.