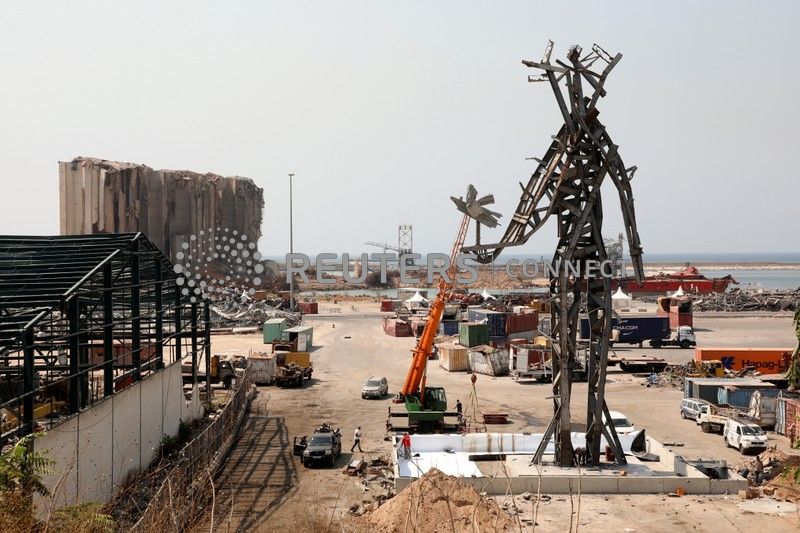 The Gesture, a 25-meter sculpture by Lebanese architect Nadim Karam to commemorate victims of last year's Beirut blast, is seen at the capital's port in Lebanon, July 30, 2021. REUTERS/Mohamed Azakir

BEIRUT (Reuters) – A sculpture of a giant angular figure made from the wreckage of last summer’s Beirut port blast was unveiled at the site on Monday, drawing support from some but also stoking anger among other Lebanese who believe justice should come before memorials.

The artwork dubbed “The Gesture” is the creation of Lebanese architect Nadim Karam, a Beirut resident and artist who says he wanted to pay tribute to the families of the victims of the explosion. It was funded by a number of private companies.

“You have a giant made of ashes, the scars of the city, and the scars of the people that did not yet heal,” Karam said, adding he hoped the families of those who lost their lives would look at the work positively.

The Beirut port blast left more than 200 dead, thousands injured, and large swathes of the city destroyed. One year afterwards, no top officials have been held accountable as a local investigation stalls.

Some relatives of victims attended the event on Monday, saying Karam was trying to claim part of the city for the public.

“When you have independent companies supporting the project and building such a project for seven or eight months … definitely I will support,” said 46-year-old Joseph Chartouni, an architect who lost his mother to the blast.

“For me the fact that it is made of steel from the site it is already a statement.”

But others were angry at the project, saying there should be no commemoration without justice being served.

A social media campaign denouncing Karam and accusing him of collaborating with the government spread a week prior to the unveiling.

Rawan Nassif, a 37-year-old filmmaker, is one of many Lebanese offended by the structure, saying the blast shouldn’t be treated as a memory yet.

“The killers have complete impunity and we are already pretending something is in the past and we are trying to transcend it through art,” Nassif said. “I feel this is a crime scene that can’t be touched yet, and it has to be investigated, you can’t come and do an event from a crime scene.”

But Karam defended his work.

“All our intentions are positive and we have no affiliation to any political party nor to any politicians,” Karam said, adding that claims about him being associated with top officials were false. “The statue reflects Beirut in its sadness and its scars.”