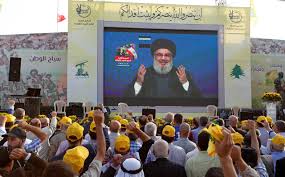 Lebanon's Hezbollah leader Sayyed Hassan Nasrallah gestures as he addresses his supporters via a screen during a rally marking the anniversary of the defeat of militants near the Lebanese-Syrian border, in al-Ain village, Lebanon August 25, 2019. REUTERS/Aziz Taher

BEIRUT (Reuters) – Hezbollah leader Sayyed Hassan Nasrallah on Sunday warned the Israeli army stationed along the border with Lebanon that his movement was preparing an imminent response to two Israeli drones which crashed overnight in a suburb of Beirut. Nasrallah, whose Iran-backed movement fought a one-month war with Israel in 2006, issued the toughest […]