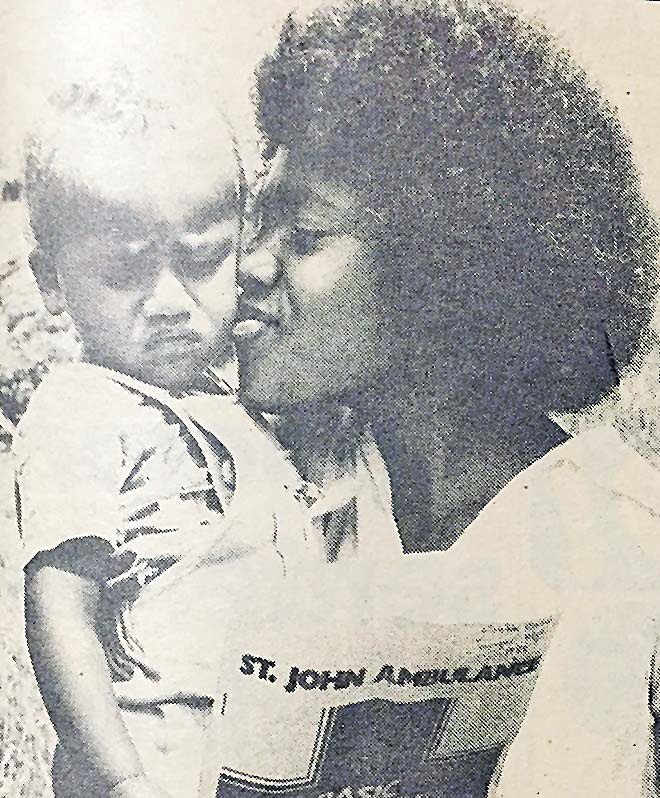 Keba Lomayaco gives an affectionate kiss to fi ve-year-old Rokowasa Qionibutobuto who she saved with the ‘kiss of life’ in Nepani, Nasinu on Sunday, February 17, 1980. Picture: FILE

After rescuing two children on two separate occasions within a span of seven days, 17-year-old Keba Lomayaco was regarded a heroine of the water in 1980.

The Fiji Times in February, 1980 had the chance to speak to Keba about her heroic actions and later published an article on February 20, 1980.

The young woman who lived at Cunningham Rd, Suva shared her success was the result of part-time training she undertook with the St John Ambulance brigade.

“I’m so happy I was able to help the children,” she said.

“And I’ll render the same service again if the need arises in the future.”

Keba came to the rescue of six-year-old Amelia Takalowa at Nepani on Saturday, February 16.

And on Sunday, February 17, she saved the life of five-year-old Rokowasa Qionibutobuto in a river near her home at Cunningham Rd.

Keba said she was at Nepani in Nasinu with other members of her family and close relatives for ceremonies marking the 10th day since her father’s death.

About 2pm, she said she went to the nearby beach to get her sister who was swimming with other children.

While she was looking for her sister, she saw a hand waving desperately from the water before the face of a child jerked out of the sea gasping for breath.

The child disappeared and Keba ran into the water, swam out and found the little girl’s body below the surface.

The girl’s eyes were bloodshot, her skin had turned blue and she was unconscious.

As Keba had learned in her first-aid training, she applied the kiss-of-life (resuscitation) repeatedly.

This newspaper reported that Keba tried 14 times without the child showing any sign of reviving.

Then on the 15th attempt the child’s stomach moved.

With more mouth-to-mouth breathing, Keba brought the girl back to life.

Members of her party and Keba took the child home, covered her with blankets and gave her hot tea.

On Sunday, a group of children were bathing in a river near Cunningham Rd.

Keba and other older girls were among them.

A 13-year-old boy took his five-year-old brother and left him on a rock while he dived into the deep water to join other children.

After a few minutes, another boy saw the body of a child drifting in the strong current until it got stuck at a shallow spot.

The article described that Keba ran to the boy and dragged him to the river bank, The young boy was unconscious without any sign of breathing. Keba rushed and again applied mouth-to-mouth resuscitation.

She said she had been with the St John Ambulance brigade for almost six years, but this was the first time she had saved anyone’s life.

Keba, who attended first aid courses for two hours a week at St John Ambulance, was a student at the YWCA typing school.