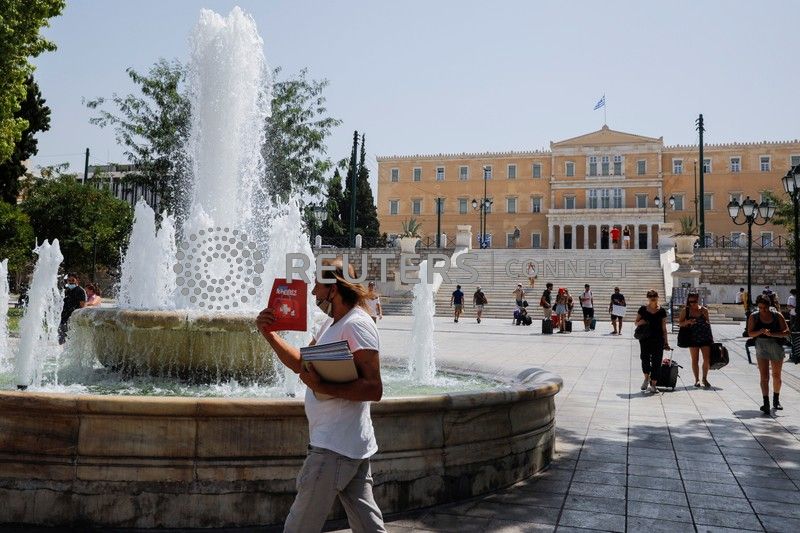 People make their way to Syntagma square during a heatwave in Athens, Greece, August 2, 2021. REUTERS/Costas Baltas

ATHENS (Reuters) – Greek authorities urged citizens to conserve electricity as the worst heatwave in more than 30 years pushed the power system to its limits on Monday and wildfires continued to burn in many areas.

With the weather service forecasting temperatures as high as 44 Celsius (111 Fahrenheit) this week, energy authorities have warned that power demand will skyrocket, testing the capacity of an electricity grid already burdened by more than 3 million holiday makers during the summer tourist season.

“We’re dealing with the worst heatwave since 1987,” Prime Minister Kyriakos Mitsotakis said after attending a meeting at a power management centre. “Everything humanly possible has been done to secure the country’s power supply. But we are also asking consumers to help us.”

As Europe’s summer of extreme weather continued, Greek firefighters have tackled more than 100 forest fires in the last 24 hours, including one on the island of Rhodes, just across the Strait of Marmara from Turkey, where fires have killed at least 8 people.

Authorities advised people to limit power usage at peak times in the afternoon and evening to prevent the electricity system collapsing, with households and businesses turning up air conditioners to seek relief from the brutal heat.

Greece’s power grid operator IPTO might ask big industries to voluntarily disconnect from the grid for a few hours and seek to import power from neighbouring countries.

More than 1,000 people died during the week-long 1987 heatwave and authorities have opened air conditioned rooms for the homeless.

“It’s just very hot. I am not used to it. It’s been a lovely day but very, very hot,” said Gordon Teahy, a tourist from Scotland, sitting in the shade of a tree outside the Acropolis of Athens, which was shut for part of the day on Monday to protect visitors from the heat.