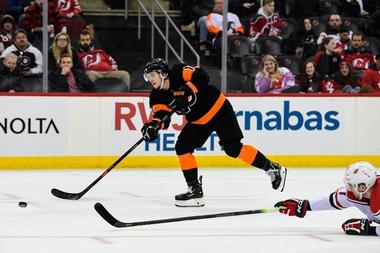 “I’m really excited about signing with the Flyers and being able to call Philadelphia home for the next six years,” the 22-year-old Konecny said. “I can’t wait to get back with my teammates and to start a new relationship with the coaching staff. It’s on me now to work hard and make up for the couple days I wasn’t able to be here.”

The contract will run through the 2024-25 season with an average annual value of $5.5 million.

“We are happy to have Travis under contract for the next six seasons,” general manager Chuck Fletcher said in a statement. “Travis has shown progression in each of his three seasons and is an integral part of our group of young forwards. His speed, skill and tenacity sets him apart in today’s NHL.”

Last season, Konecny collected 24 goals and 25 assists for 49 points, the latter two categories being career highs. The first-round pick (24th overall) by the Flyers in 2015 has 124 points (59 goals, 65 assists) over 233 games in his three-year NHL career, all with the Flyers.