Ex-head of world athletics Diack given jail sentence for corruption 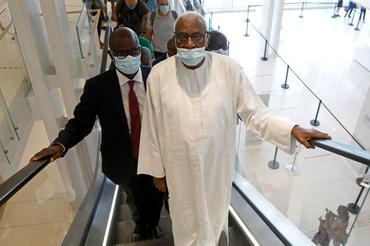 PARIS (Reuters) – Lamine Diack, once one of the most powerful people in athletics, was convicted in France on Wednesday of running a clique that covered up Russian doping in return for bribes worth millions of dollars and sentenced to spend at least two years in jail.

The 87-year-old former head of world athletics’ governing body was found guilty of taking kickbacks from athletes in return for concealing positive drug tests, which enabled them to continue competing, including at the 2012 London Olympics.

The court had heard how Diack solicited bribes totalling 3.45 million euros ($4.1 million) and paid off other officials at the International Association of Athletics Federations (IAAF) to aid with the cover up.

The former long-jumper’s actions had “undermined the values of athletics and the fight against doping”, the presiding judge said.

iThe court handed Diack a four-year prison sentence, two years of which are suspended and a fine of 500,000 euros. It also ordered him to pay 5 million euros in damages to World Athletics (formerly IAAF) together with his son and co-accused, Papa Massata Diack.

Lamine Diack’s lawyers said he was a scapegoat “sacrificed in the name of political correctness”, adding they would appeal the judgment which was unfair and inhumane.

He will remain under house arrest pending the appeal, which could last months.