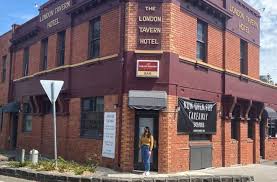 FILE PHOTO: Gina Cimarosti, manager of the London Tavern Hotel, stands outside her empty pub in Melbourne, which is in lockdown due to the coronavirus disease (COVID-19), Australia October 21, 2020. REUTERS/Ian Ransom

SYDNEY (Reuters) – Victoria state, Australia’s COVID-19 hotspot, on Sunday delayed the eagerly awaited removal of strict lockdown restrictions for cafes, restaurants and pubs in the capital Melbourne because of an outbreak in the northern suburbs.

The restrictions have kept most retail businesses in Melbourne providing online services only since early August and 5 million people living under stay-at-home orders were hoping for an announcement on Sunday.

State premier Daniel Andrews on Sunday said an outbreak in Melbourne’s northern suburbs would likely delay the reopening of retail and hospitality businesses by a few days, as officials preferred to wait for hundreds of test results. He planned to announce some restrictions would be lifted from mid-week.

“If I could stand here today and make these announcements, I would,” Andrews said.

“There are 1,000 swabs, plus, in the laboratory and we do not have the results for those yet. Once we do get those results we will be in a better position, will have a clearer picture, to be able to make announcements.”

In the previous 24 hours, the state found six new cases linked to the northern suburbs outbreak which has spread through 11 households, up from 6 on Tuesday.

Officials wanted to know whether all known infections and expected positive cases from the tests were linked, Andrews said.

“We will get them today and tomorrow and hopefully we are able to make, not only announcements but to take the big steps safely around the middle of this week.”

There were seven new COVID-19 cases in the state, extending the downward trend of the 14-day moving average of new cases to 4.6. Andrews had previously said the key metric had to be below 5 for the next band of restrictions to be lifted.

With 817 deaths, Victoria accounts for more than 90% of all lives lost to the coronavirus in Australia this year. The country has recorded nearly 27,500 infections, a fraction of those in some other countries.