Australia retail sales slide in August, but relief in sight 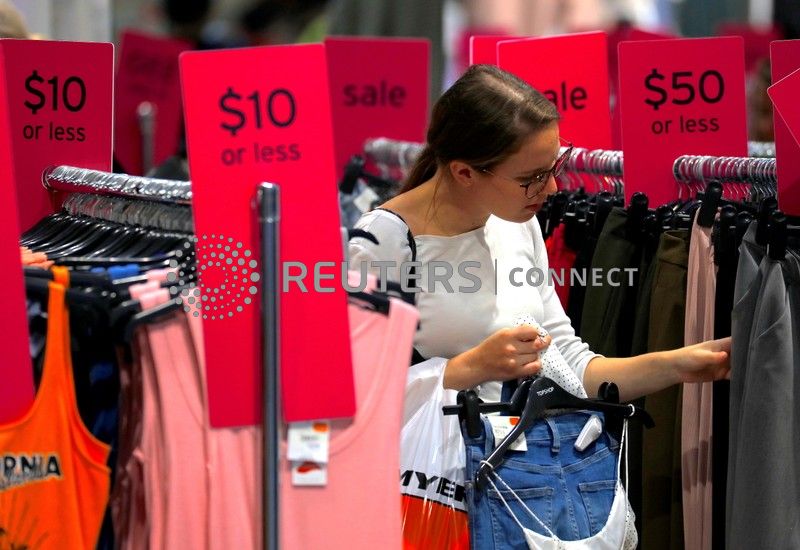 FILE PHOTO: A shopper holds items and looks at others on sale at a clothing retail store in central Sydney, Australia, March 19, 2017. REUTERS/Steven Saphore/File Photo

SYDNEY (Reuters) – Australian retail sales dived for a third straight month in August as half the population were trapped in coronavirus lockdowns, though reopening is in sight as vaccinations race toward world-beating levels.

Figures from the Australian Bureau of Statistics on Tuesday showed retail sales fell 1.7% in August to A$29.3 billion ($21.27 billion). That followed a 2.7% drop in July, but did beat market forecasts of a 2.5% slide.

The A$360 billion retail sector accounts for around 18% of gross domestic product and further weakness is expected this month with Sydney, Melbourne and Canberra all locked down.

While the entire economy is certain to shrink sharply this quarter, relief is in sight with New South Wales just a couple of weeks from easing restrictions as people flock to get jabbed.

After an agonisingly slow start, almost 86% of the adult population in NSW have now had a first shot and 60% are double dosed. By the end of October, the state is expected to pass world leader Portugal which has 84% fully vaccinated.

For Australia as a whole, 77% have had their first dose and the fully vaccinated share will soon surpass the United States.

“At reopening, spending will be driven by pent‑up demand after months of lockdown and accumulated savings,” said CBA economist Stephen Wu.

“But we expect bumps along the way as some consumers will be initially wary of catching the virus or from coming into contact with the virus and being forced into isolation.”

Yet the pandemic has also massively accelerated the adoption of online sales both by consumers and retailers. Online sales of food have doubled on pre-pandemic levels and even fine dining restaurants have gotten into the game, selling take-away courses and assemble-at-home gourmet meal kits.

It has been a life saver for hard-pressed department stores with annual sales booming by more than 50%.

Analysts at NAB estimate Australians spent almost A$51 billion on online retail in the year to August, an annual increase of around 30% and twice the levels seen pre-pandemic.

The bonanza, however, is stretching supply chains and pushing up costs. Australia Post recently boasted its busiest day ever and warned customers to shop early for Christmas.