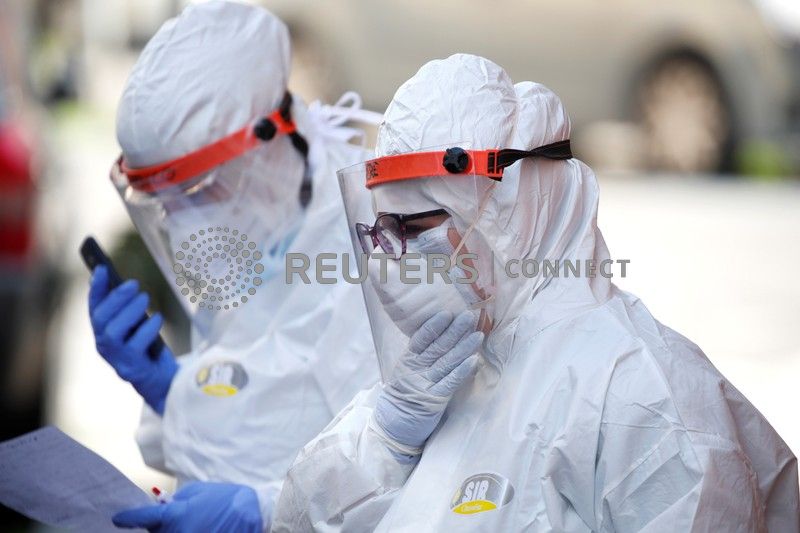 Medical staff in full protective gear are seen on a street in Naples, as the spread of coronavirus disease (COVID-19) continues, Italy, April 2, 2020. REUTERS/Ciro De Luca

ROME (Reuters) – A reliable antibody blood test to find out who has already had the coronavirus would give a better picture of the extent of Italy’s epidemic and could possibly be identified within days, scientific advisers to the government said on Friday.

More than 115,000 people have tested positive for the virus in Italy since the outbreak was discovered in its wealthy northern regions on Feb. 21 and almost 14,000 have died, the highest death toll in the world.

But daily tallies of new infections and fatalities have been steady in recent days, which experts hope points to a decline soon.

Pressure is growing to find out who has been exposed to the virus and whether some people have developed immunity, in order to soften the severe lockdown measures the government has imposed to curb the contagion.

Franco Locatelli, the head of Italy’s Higher Health Council, said a reliable antibody testing system to use at the national level had still to be identified, though various products had already been proposed.

Locatelli told reporters that government scientists were working hard to analyse the tests and hoped to have a result “in a few days”. He added that it would probably then take another month before the health authorities are able to roll out recommendations on a nationwide testing procedure.

Some badly hit Italian regions have already started buying some of the tests already on the market.

Speaking at the same news conference, health officials said the lockdown had prevented a potentially ruinous spread of the contagion from its northern epicentre to less developed southern regions.

“The social distancing measures adopted on a national scale have meant that where the number of infections was relatively low, it remained low,” said Giovanni Rezza, director of infectious diseases at the national health institute.

The government said this week that curbs on movement and business activities introduced nationwide on March 9 would stay in place until at least April 13.

The head of the Civil Protection Agency, Angelo Borrelli, said on Friday he expected them to remain beyond May 1.