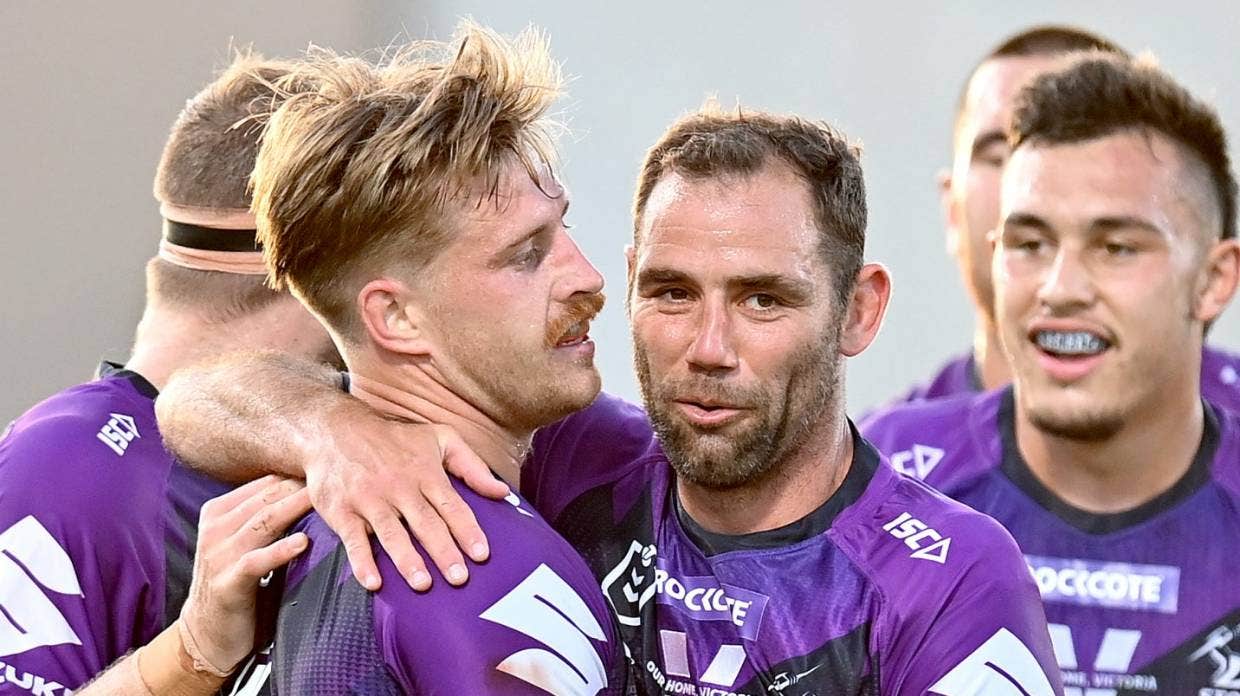 Cameron Munster, left, of the Melbourne Storm is congratulated by team-mate Cameron Smith, right, after scoring a try against the Cowboys. Picture: STUFF SPORTS

It’s hard not to view every Melbourne Storm match through the prism of Cameron Smith.

On Sunday, the future Immortal showcased his full arsenal in guiding the Storm to a 36-20 win over the North Queensland Cowboys.

Smith and his Storm team-mates won this match in a canter. North Queensland are an awfully ill-disciplined team and that recipe is not often a successful one against Melbourne.

Smith set up three tries in the first half alone – one each for Nelson Asofa-Solomona, Tino Fa’asuamaleaui and Cameron Munster. The match was over by halftime and, with the result beyond any doubt, the Cowboys decided to play some football.

But the Storm never left second gear, guided by their captain who ruled with a calm demeanour from the first whistle.

“The Cowboys have a great roster,” Munster said post-match. “Unfortunately, they’ve had some injuries through the year, but with the humid weather, we knew they would adapt to it. A couple of years ago we put them in form and they won the comp. They’re a good side and we knew it wasn’t going to be easy today.”

In reality this match was a masterclass from Smith, who has still not made a decision regarding his playing future. If this performance was anything to go by, the player many consider the greatest of all time still has plenty to offer.

Smith marshalled his troops from dummy half, threw perfect passes from the first minute to the last and punished the Cowboys for disorganised goal-line defence with precision balls to set up Asofa-Solomona, Faasuamaleaui and Munster.

It’s easy to see why Smith can’t make a call either way. He is still at the peak of his powers and this Melbourne team seem to be one level better than the Storm outfits of the past two years.

No side seemingly has any clue how to stop Munster’s tackle-busting bursts, Jahrome Hughes has excelled in his second year at halfback and, while Ryan Papenhuyzen did not play on Sunday, he has staked a claim as the NRL’s second-best fullback via some scintillating form this season.

Combine that slick spine with a pack which wins the middle-third battle each and every week, and the Storm have a legitimate claim to premiership contention. Only the Panthers are in better form, and no-one is discounting the back-to-back premiers from Bondi. But while Melbourne have fallen short come finals time the past two seasons, there is a new resolve to this team.

Perhaps it is the knowledge this is almost certainly Smith’s last season with them. Perhaps it is just the spine clicking thanks to a powerful back.

Either way, Smith’s decision will remain one of the hottest topics in rugby league until he makes the call to hang up the boots, play on at the Storm or join the Broncos – the club which turned their back on Smith as a teen.