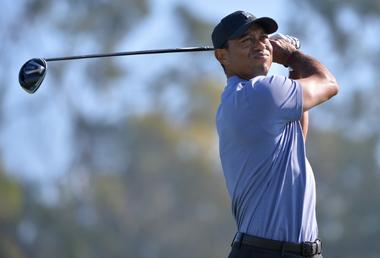 SAN DIEGO (Reuters) – Tiger Woods on Thursday said winning a record-breaking 83rd PGA Tour event at Torrey Pines this week would make the monumental feat even more special given his long and happy history at the ocean-side course.

It is probably only a matter of time before the 44-year-old American passes Sam Snead on the all-time win list and he said he would be thrilled to do it at a place that shaped his earliest memories of the sport.

Woods got off to a solid start on Thursday, carding a three-under par 69 in the first round of the Farmers Insurance Open to sit three off the lead, and he appeared to gain confidence as the day went on.

Woods is an eight-time winner at Torrey Pines including seven Farmers Insurance Opens and the 2008 U.S. Open.

But it is some of his earliest memories that come to mind when he reflects on the scenic course, which is perched high above cliffs overlooking the Pacific Ocean.

“I have a lot of great memories here. It’s great to be back,” the Southern California native said.

“This was my first tournament I ever went to with my dad,” he said, referring to father Earl, who Tiger was close with up until his death in 2006.

“The old Andy Williams — so we’ve been coming down here a long time,” he said with a smile after namechecking the American singer who hosted the tournament from 1968 to 1988.

“I’ve played here since I was single digits in age all the way through.

“This golf course has a lot of great memories and hopefully tomorrow I can piece all that together again like I did today.”

Woods said he was amazed at how Torrey Pines, which saw its South Course undergo a multi-million renovation ahead of this year’s tournament, has changed over the years.

“When I first came down here, there was a lot of 1-irons off the tees and now the 1-iron doesn’t exist anymore in golf bags,” he said.

“But overall I feel like I had a lot of good vibes when I come down here to San Diego and a lot of great memories.”