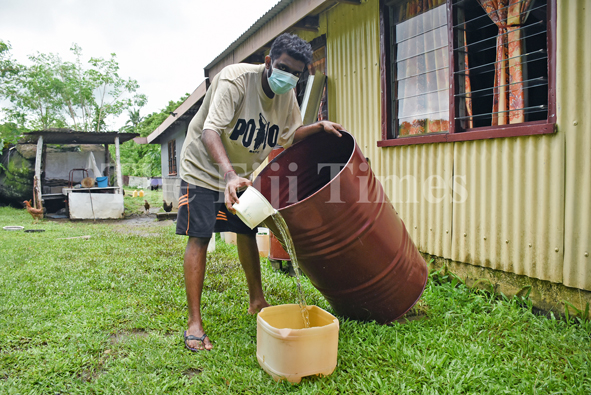 Ravinesh Chandra collects rain water to use for household needs in Navula Lautoka. Water from the Water Authority of Fiji main line fails to reach his home due to very low pressure. Picture: REINAL CHAND.

A suspected blockage to a water main at Navula settlement in Lautoka has been identified as the cause of low water supply to several homes in the area.

As a result, residents have been living on rationed water and rainwater since last October.

“As a result, it is unable to meet the water demand requirements for the existing customers, as well as the new customers that have started to move into the area,” he said.

“From past experience, we have seen that when there are grading works, pipes can be damaged and gravel enters the pipes, requiring our team to repair and flush the water mains thoroughly.

“When the gravel enters the pipes, it reduces the hydraulic diameter of the pipes, resulting in less water flow and pressure along the pipe due to the restrictions.

“Our team has conducted flushing works to flush out the gravel; however, there appears to be some gravel still restricting the flow at some bends and connections along the water mains.”

He said their teams were working towards resolving this issue by exposing the sections of mains that were prone to blockages.

“This includes the tapers where the water main is reduced from DN 80 to DN 50, bends, and river crossings at the lowest section of the main where the gravel and silt normally settle and is flushed out.”

He said delays to these works were also caused by Tropical Cyclone Cody.