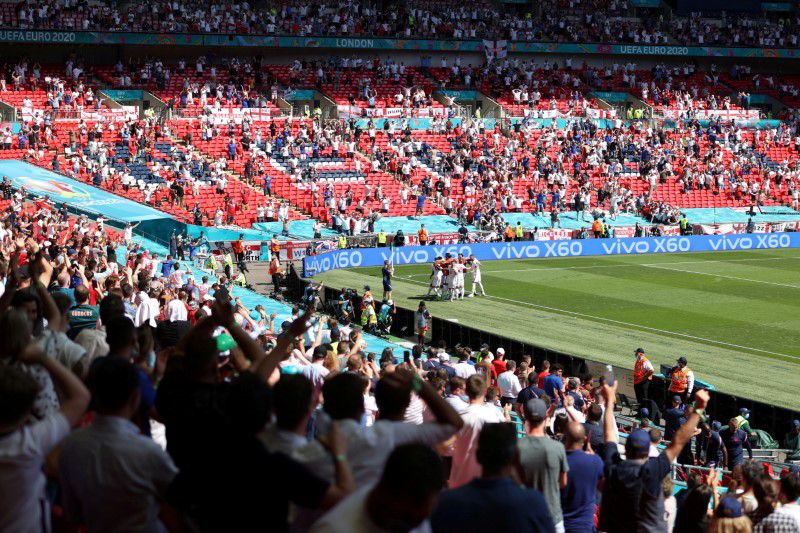 June 17 (Reuters) – UEFA hopes negotiations with the UK government on lifting quarantine restrictions for overseas fans will result in a change that allows them to attend the semi-finals and final of the Euro 2020 tournament at Wembley Stadium.

Under current regulations in England, fans travelling from countries on the government’s ‘amber list’ must quarantine for 10 days on arrival in the country, making it difficult for them to fly in for games.

Outside of the three British teams — England, Scotland and Wales – all other competing countries are on the amber list except for Turkey which is on the stricter red list.

“We are in discussions for the knockout rounds, especially for the semi-final and final, the obvious question is also to have overseas spectators,” UEFA tournament organiser Martin Kallen said on Thursday.

“Every day we are in discussions with local authorities but we hope to come to a good conclusion together with the English government.

The UK government has agreed to increase the capacity at Wembley to 50% for the knockout stage, meaning crowds of 40,000 rather than the group stage limit of 22,500.

UK Prime Minister Boris Johnson has delayed plans to lift COVID-19 restrictions, which means the goal of a full house for the final is now unlikely to be met.

“It was once in the plan, on the roadmap of the UK, at the moment with the Delta variant they have agreed on 50% and I am not sure it will go higher than 50%,” said Kallen.