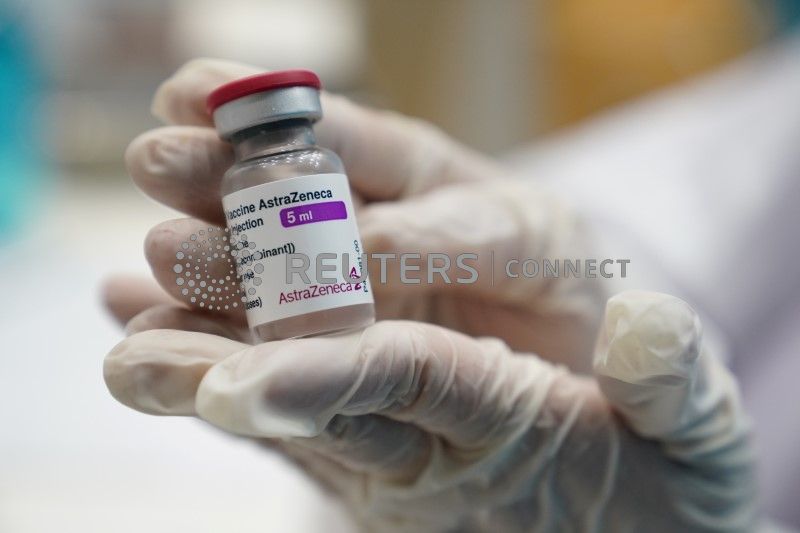 FILE PHOTO: A health worker shows a vial of the AstraZeneca COVID-19 vaccine against the coronavirus disease (COVID-19) as Thailand start a mass inoculation at a gymnasium inside the Thammasat University in Pathum Thani, Thailand June 7, 2021. REUTERS/Athit Perawongmetha/File Photo

BANGKOK (Reuters) – Thailand has abandoned its plan for a 16-week gap between doses of the AstraZeneca coronavirus vaccine and will opt for a shorter interval of 10 to 12 weeks instead, a senior health official said on Friday.

The government, which plans to use the AstraZeneca vaccine for most of its inoculations, had sought to reach more people faster by stretching the gap to 16 weeks, beyond the 12 weeks maximum approved by the European Medicines Agency.

A 16-week interval has not been tested in human trials.

But Sophon Mekthon, the public health minister’s assistant, told Reuters Thailand’s communicable disease committee wanted to revert to the previous interval, adding that it could still be extended in future if necessary.

A royal-owned Thai firm has partnered with AstraZeneca to make its vaccine locally, but has experienced delays, also impacting Taiwan, Malaysia and the Philippines.

Health Minister Anutin Charnvirakul on Friday said the government would receive 10 million AstraZeneca doses monthly from July until its quota of 61 million doses is met. Thailand has also been using Sinovac’s vaccine.

The rush for vaccines came as Thailand was hit by its most severe wave of coronavirus infections in early April, months before the start of its immunisation drive.

It has secured 105.5 million doses so far and will procure 50 million more next year, authorities have said.