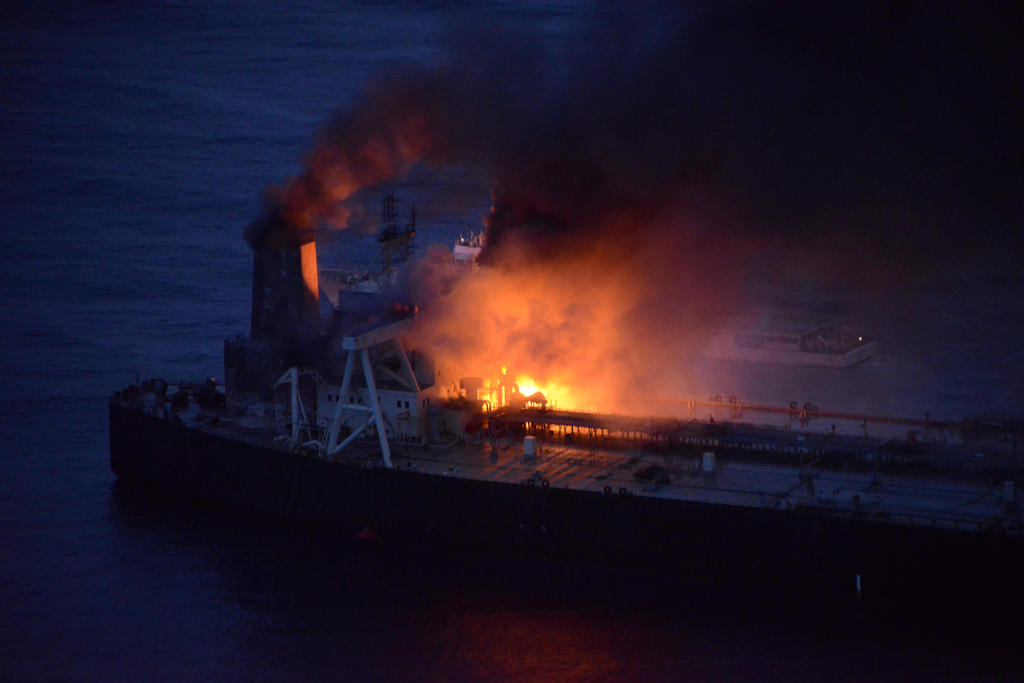 FILE PHOTO: The New Diamond, a very large crude carrier (VLCC) chartered by Indian Oil Corp (IOC), that was carrying the equivalent of about 2 million barrels of oil, is seen after a fire broke out off east coast of Sri Lanka September 4, 2020. Sri Lankan Airforce media/Handout via REUTERS

COLOMBO/NEW DELHI (Reuters) – Sri Lanka is seeking at least 340 million rupees ($1.9 million) from the owner of the stricken oil supertanker New Diamond for assistance given to the vessel since it caught fire on Sept. 3, the coordinating officer to the country’s attorney general said.

Nishara Jayaratne said the cost was for services provided by various departments including the Sri Lankan navy, air force, ports authority and Marine Environment Protection Authority, among others, up until Sept. 15.

The fully-loaded vessel is still in Sri Lankan waters, although the fire was completely doused last week.

Greece-based Porto Emporios Shipping Inc is the registered owner of the 20-year old Panama-flagged very large crude carrier, according to Refinitiv data. New Shipping Ltd is the manager of the vessel.

The vessel is chartered by Indian Oil Corp to import 2 million barrels of oil from Kuwait to Paradip in eastern India.

“We decided to let the salvage master do his job with no restrictions from us on maintaining distance. There is strong current in the area that pulls ship further away. Its hard to pull it back closer to land due to the heavy current,” de Silva told Reuters.

The ship has left long trails of marine oil slicks.

De Silva said all Indian vessels engaged in dousing the fire and subsequent activities had left Sri Lanka this afternoon.

He also said the $1.9 million claim was a preliminary sum, as the Sri Lankan Navy was still engaged in the operation.

Salvagers have already vacated the ruptured tank in the engine room and transferred the dirty water into the ballast section.