Sealed with a kiss, Nadal eases into third round in Melbourne 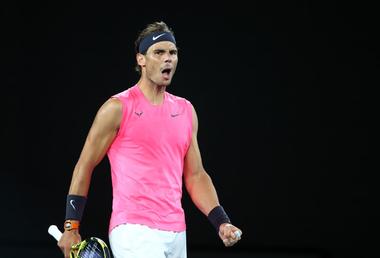 MELBOURNE (Reuters) – Rafa Nadal passed up a good few chances for an earlier finish to his night before muscling his way into the third round of the Australian Open with a commanding 6-3 7-6(4) 6-1 victory over Argentine Federico Delbonis on Thursday.

The match lacked nothing in quality power tennis but was almost entirely devoid of drama and the most notable incident came late in the third set when the ball flew off top seed Nadal’s racket and hit a ballgirl on the head.

The 19-times Grand Slam champion raced over to check she was alright and then planted a kiss on her cheek, drawing a huge cheer from the Rod Laver Arena crowd.

“It probably was one of the scariest moments on the tennis court because the ball was straight to the head,” said Nadal.

His mercy mission completed, Nadal went back to the baseline, re-applied his game face glare and resumed pummeling his 76th-ranked opponent.

The Spaniard, hunting for a second Australian Open title 11 years after his first, has now lost only three sets in his last nine matches at Melbourne Park, all in his defeat to Novak Djokovic in last year’s final.

Delbonis never looked like adding to that tally in the two and a half hour contest, particularly as he was unable to muster up as much as a single break point.

The world number one was profligate with his own break points – converting only three of 20 – but there was never a moment of doubt that he would move through.

The 33-year-old said it was a minor concern that he was forced to go to a tie-breaker in the second set despite having nine opportunities to break Delbonis.

“When you are not able to convert one break point after I don’t know how many chances, of course you are in trouble,” he said.