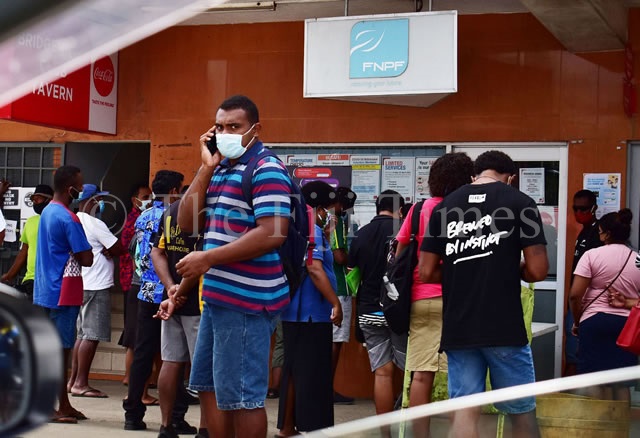 Members of the public at the Fiji National Provident Fund branch in Nausori. Picture: FILE

The FNPF mandated contributions by the employers and employees will go up from five per cent each to six per cent effective from January 1, 2022.

Economy Minister and Attorney-General Aiyaz Sayed- Khaiyum told Parliament last week that this will be in effect until December 31, 2022.

“That COVID-19 Response Amendment made changes to the Fiji National Provident Fund Act and reduced the rates of mandated contributions by employers and employees from 10 per cent and eight per cent respectively, to five per cent each. The reduced rates were initially effective from April 1, 2020, to December 31, 2020.

Mr Sayed-Khaiyum said the FNPF (Budget Amendment) Act 2020 further amended the FNPF Act and extended the period for the reduced rates to December 31, 2021.

“This Fiji National Provident Fund (Budget Amendment) Bill 2021, seeks to amend the FNPF Act to increase the rates of mandated contributions by the employers and employees from five per cent each to six per cent with effect from January 1, 2022, to December 31, 2022.”

Mr Sayed-Khaiyum said that members with FNPF accounts have received contributions at a lower rate for more than one year.

“With this one per cent reversal from employers and employees, a total of around $60 million per year is expected to be credited to members’ FNPF accounts.

“The Bill also seeks to amend the FNPF Act to redefine the term ‘entitlement’, even to include any age that is below the prescribed age subject to prescribed conditions.”