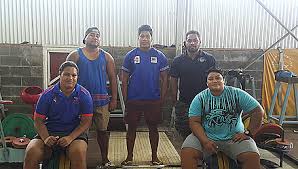 APIA, 27 MAY 2019 (SAMOA OBSERVER) – The  Samoa Weightlifting Team for the 2019 International Weightlifting Federation Junior World Championships to be held in Suva, Fiji from 1- 8 June has been selected.

“We’re very fortunate this year it’s held in our side of the world.”

There will be 89 countries competing in the Under-20 tournament, and Tuaopepe said the level will be very high.

“In probably a lot of these divisions, the top two or three will actually medal at the Senior World Championships, that’s how good they are.”

Samoa is taking a strong team as well, with Stowers and Don Opeloge currently ranked second in the world in their divisions, while Petelo ranks third.

“We have a very realistic chance of winning medals,” Tuaopepe said.

Stowers and Opeloge both won gold at the recent Arafura Games in Darwin, Australia, and Tuaopepe said Petelo is a rising star in the team as well.

“She’s very new, she’s only been in it two years but she has improved rapidly, and she’s made the top three ranking.”

He said it all comes down to what happens on the day and how fired up the six athletes are.

Samoa has never won a medalled at a World Championship event before, and Tuaopepe said achieving that is one of the main goals for his team.

“We’re all taking it very seriously, and we’re hoping for the best.

“There’s no excuses going into this tournament, everyone is well prepared and they’re in good condition.”

He said the Championships is also great practice for the Pacific Games event in Samoa in July.

“Especially at this level, you’re really competing at the highest level.

“It’s much bigger, the lifting there will be much higher than what’s lifted at the Pacific Games.”

The Junior Worlds is also an Olympic qualifying event.

“We’ve got three or four of these guys and girls that are in the running to try and qualify to the Olympics, so it’s another chance to add points,” Tuaopepe said.

He thanked the Government of Samoa, SASNOC. and the team’s naming sponsor S.W.A. for making it possible for the team to travel to tournaments like the Junior World Championships and Arafura Games.

Tuaopepe said they hope to pay the support back with good results, namely medals that Samoa can be proud of.