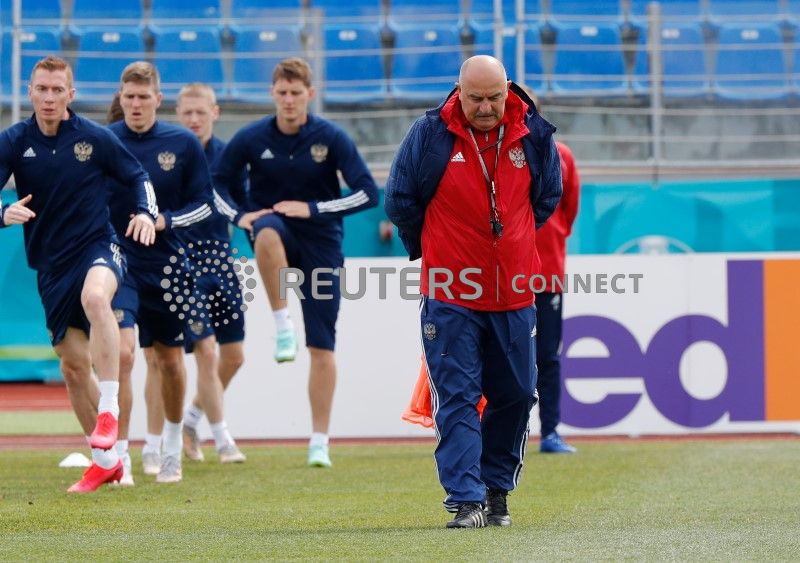 ST PETERSBURG, Russia (Reuters) -Russia deserved the criticism they got for their lacklustre performance against Belgium in their Euro 2020 opener, manager Stanislav Cherchesov said on Tuesday, but added the squad was preparing well for their next match against Finland.

Russia lost 3-0 to Belgium on Saturday on home turf in St Petersburg, prompting criticism from fans and pundits. The match highlighted the vast skill and talent gap between Belgium, the world’s top-ranked side, and Cherchesov’s team.

Russia’s backline crumbled under pressure from the fearsome Belgian attack, raising questions about the team’s prospects of making it to the knockout stage from Group B, which also includes Finland and Denmark, for the first time since 2008.

“The criticism was deserved,” Cherchesov told reporters a day before Russia face Finland in St Petersburg.

“We have recovered from the first match. Now we have an absolutely different kind of preparation.”

Finland, making their first appearance at the finals of a major tournament, won 1-0 in their first game against Denmark, a match that was overshadowed by the collapse on the pitch of Danish playmaker Christian Eriksen.

“Finland are not an easy opponent and they have already demonstrated this (against Denmark),” Cherchesov said.

The Finns kept six clean sheets in qualifying and Russia defender Georgy Dzhikiya highlighted their organisation as a key strength.

“They are a disciplined team,” Dzhikiya said. “They are organised and play in a compact way.”

Cherchesov said Yuri Zhirkov had injured his thigh in the match against Belgium and it was later confirmed that the defender, who turns 38 in August, would miss the rest of the tournament.

“Given the severity of the injury, the coaching staff has decided to release the player (Zhirkov) from the team,” a statement from the Russian team said on Twitter.