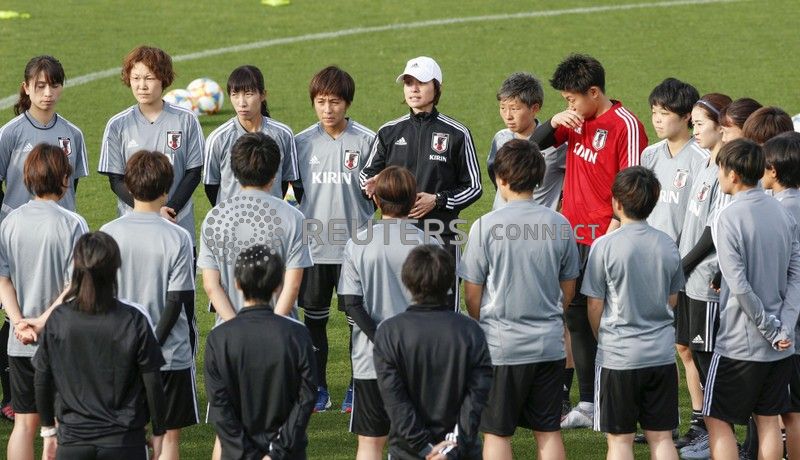 TOKYO (Reuters) – A fun and relaxed atmosphere prevailed at Japan’s training camp on Wednesday as Asako Takakura’s team began their final preparations for the women’s World Cup in France.

The “Nadeshiko” head to France on Monday hoping to reach their third consecutive final of the tournament they won in 2011.

Takakura is keen to keep preparations light and enjoyable for her players before the hard work begins in France.

“We will be together for a long time and individually there will be tense moments, ups and downs, so I told the squad let’s enjoy,” Takakura told reporters after the first day of camp in Narashino, near Tokyo.

“Each player has to remember that you move forward, not go backwards.”

Takakura is taking a young squad to France with one eye on the Tokyo 2020 Olympics and has stressed the importance of building confidence to peak when the tournament starts.

“Each player has their own different training regime so that they will peak at or after the opening of the World Cup,” she said.

Takakura’s squad average less than 38 caps each with 14 players aged 23 or younger.

The more experienced players in the squad have also welcomed the relaxed atmosphere, which was apparent throughout the training session on Wednesday as players laughed and joked with their coaches in a series of small games.

Takakura has also arranged a training match at the weekend against a local university men’s team.

“Each player should send good and loving energy, keep relaxed but have good discipline,” stressed forward Mana Iwabuchi, who has 61 caps for her country at the age of 26.

Defender Aya Sameshima, a veteran of the 2011 victory, hopes to serve as an inspiration for young, aspiring Japanese soccer players.

“By making progress and having results, our exposure in the media will be bigger and I hope that we will inspire young girls,” she said.

The world number seven have been drawn in Group D alongside Argentina, Scotland and England, who defeated Japan in the final of the SheBelieves Cup in March.