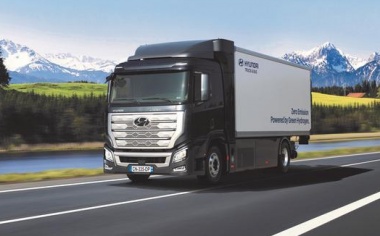 Hyundai's H2 Xcient Fuel-Cell truck is pictured in this undated handout image. The trucks are set to hit the roads in Switzerland next month as the South Korean automaker looks to establish a case for its zero-emissions technology in a low carbon world. Hyundai/Handout via REUTERS ATTENTION EDITORS - THIS IMAGE WAS PROVIDED BY A THIRD PARTY. NO RESALES. NO ARCHIVES

FRANKFURT/ZURICH (Reuters) – Hyundai’s (005380.KS) hydrogen-powered 18-tonne trucks are set to hit the roads in Switzerland next month as the South Korean automaker looks to establish a case for its zero-emissions technology in a low carbon world.

Invented nearly two centuries ago, hydrogen fuel cells first lost out to combustion engines and now trail electric batteries in the push for greener transport because they are expensive, hydrogen is hard to store, and most of it is extracted from natural gas in a process that produces carbon emissions.

But when it comes to trucks, Hyundai and its partners argue that electric batteries won’t always do the job because the bigger the payload, the bigger – and heavier – the battery, and that’s a problem for crawling up Swiss mountains.

And with more than half of Switzerland’s energy coming from hydropower, the country has the potential to extract “green” hydrogen from water with electrolysis, an energy-intensive but carbon-free process if powered by renewable electricity.

“It is not enough to produce a truck. You have to take care of the entire ecosystem, find like-minded partners and show this all makes sense for the customer,” said Mark Freymueller, chief executive of Hyundai Hydrogen Mobility (HHM).

“It is possible to do this with a holistic approach and the right mindset,” he told Reuters. To be sure, Switzerland’s green hydrogen is far more expensive than diesel now but Hyundai hopes that as governments clamp down on carbon emissions and the cost of producing the clean fuel drops, the numbers could start to add up.

McKinsey & Co said in study in January that the cost of hydrogen made with renewable energy could drop to 2 euros/kg by 2030 from 3-4.5 euros now – achieving cost parity with diesel for heavy vehicles, once the relative efficiency of the power sources and the lifetime costs of a truck are factored in.

While hydrogen has long been vaunted as a potential alternative to fossil fuels, expectations that fuel cells will have a role to play as the world decarbonises has helped push hydrogen-linked stocks to their highest in over a decade.