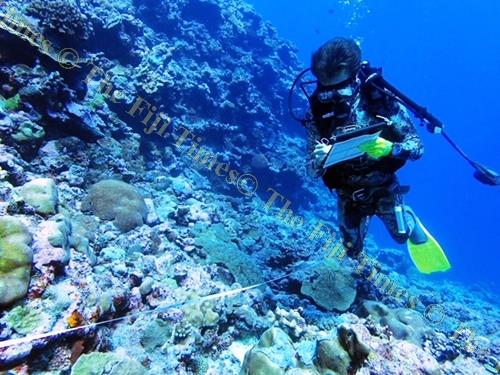 A Wildlife Conservation Society and Vatuvara Foundation personnel carries out a survey in the northern waters in Lau. Picture: SUPPLIED

A scientific report on coral damage in the Northern Lau waters sustained from Severe Tropical Cyclone Winston suggested there were large areas of undamaged coral reefs.

This meant that coral communities cover could regenerate and recover by 2021 or earlier, if there were no further stresses to the reefs.

Results of the Marine Biological Surveys of Coral Reefs in the Northern Lau Groups conducted by the Vatuvara Foundation and the Wildlife Conservation Society in May last year indicated that the total mean biomass of fish in the island was an average weight of 1095 kilograms of fish over one hectare of coral reef.

The report revealed this was similar to other areas in the Lau Province, which had a biomass of 1126 kilogram per hectare of reef, adding that this was higher than parts of Fiji.

Wildlife Conservation Society director Dr Sangeeta Mangubhai said: “We know from studies of coral reefs from all over the world, that fish biomass of 1000 kg per hectare and over are indicative of healthy populations.

“Fishing around Vatuvara, Kaibu, and Yacata islands is predominantly restricted to subsistence fishing by the local residents, explaining the higher fish populations found on those islands compared with Adavaci and Kanacea, which are closer to commercial markets.”

“A number of globally threatened species were recorded around the islands, including the hump head wrasse (varivoce) which is listed under the Convention on International Trade in Endangered Species of Wild Flora and Fauna (CITES) and considered endangered on the IUCN red list, facing a very high risk of extinction.”