Osborne: Awareness on cancer should be an everyday occurrence 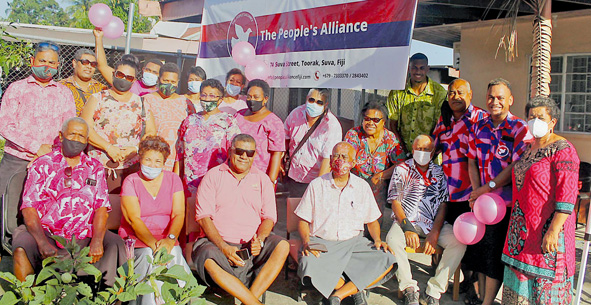 Nadi entrepreneur Jennie Osborne says awareness on cancer should be an everyday occurrence.

During a Pinktober event with members of The People’s Alliance West team recently, Ms Osbourne recalled the challenges she went through while caring for her mother who passed away from the disease.

She said she was one of those who were forced to learn about looking after a loved one with cancer on the go.

“My mum died of cancer and she always denied that she had it,” Ms Osborne said.

“I believe that there should be enough airtime about cancer and it should not only be on October but throughout the year because many people live in denial and they need to know how severe or worse it can become.

“We need Fiji’s medical team or the organisations involved to set up programs for people on how to look after cancer patients in their own homes.”

Ms Osborne said apart from teaching family members of cancer victims about how to care for their loved ones, there needed to be more programs that focused on changing mindsets of the vulnerable.

“My family and I did not know how to look after my mother who was always respected as the boss of the family, so it was diffi cult.

“I believe we need more training for not just the villagers but urban areas as well, in every aspect and in every part of this country because cancer is evident everywhere.”

Lautoka Young Alliance president Veilawa Soko said the death toll of cancer patients was high but not often highlighted in the media.

“I believe that cancer information is paramount for fi nancial aid assistance and also for family and community support,” he said.

“It was an important time to talk about the issue of cancer and I was happy to see everyone reach out to their pockets and give whatever they can towards the Fiji Cancer Society for the much needed cause,” she said.