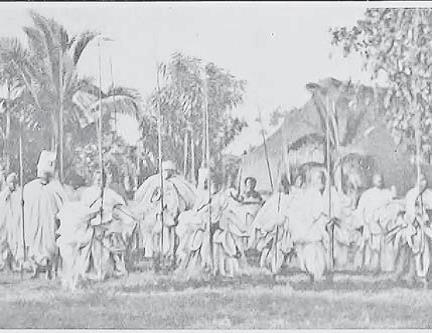 Last week we looked at the naga, stone formations and rituals used in old Fiji.

These naga rituals were different from the ancient ancestral worship practices of the natives.

Some early writers said the stone rituals were cultish in nature.

The naga rituals were performed largely in certain parts of western Viti Levu, particularly the area known as Colo West.

Some researchers identified that these may have been Melanesian cults that originated from Vanuatu.

One said the naga cult was introduced from across the western ocean probably by two gods or heroes called Veisina and Rukuruku, names symbolising the male and female being.

In some places in the west of Viti Levu, the naga rites were also called baki.

The naga and baki rites were associated not only with crops and fertility but also with initiation rituals for priests and youths.

According to anthropologist, Basil Thomson, each naga or “lodge” as he called it, comprised three “degrees”.

The vere matua, consisted of all old men who acted as priests of the order.

The vunilolo was made up of grown men and the vilavou were all the youths who had just been initiated (novices).

One of the great annual festivals that happened inside the naga was the initiation of youths, like circumcision, which admitted them to manhood.

The word vila was the inland synonym for baki. With the distributive affix ya, yabaki meant “the new year”.

The vilavou, or the annual new year ceremony of initiation, was an annual festival.

It was held between October and November when the drala tree (Erythrina) bloomed.

The flowering of the drala also marked the season of yam planting.

Preparation for the vilavou began months before the event, by placing a tabu on some food items and “property”.

Many pigs were dedicated to the naga event by cutting off their tails and running them loose within the vicinity of the naga.

“Masi was beaten, clubs and spears were carved, paint was prepared for the bodies of the worshippers, and a vast quantity of yams was planted,” Thomson said.

“If any man concealed any of his property, designing not to give it, he was smitten with madness.”

The same fate fell upon anyone who killed one of the tailless pigs or dug up plants that grew near the naga.

To attend the annual naga ritual, invitations were sent to the members of other naga called the dre.

They brought to the naga highly valued traditional items.

On the appointed day of the ritual, the vere matua (naga elders) and the vunilolo (middle-aged men) went first inside the naga to present a feast and make “other preparations”.

While this was going on, in the village, all the vilavou had their heads shaved.

They were swathed in coils of masi.

A procession made up of young initiatives was then formed.

To kick off the proceedings, an old vere went into the naga first.

He carried a carved walking stick with him.

He sounded a shrill whistle, and all the boys followed him in single file, carefully following his footsteps.

As they approached the naga they heard the weird chant of the men from the inside (elderly and middle-aged men). Thomson described the sound as “the surf breaking on a distant reef”.

“The boys flung down their weapons outside the sacred enclosure, and with the help of the vunilolo divested themselves of the huge swathing of masi, each lad revolving slowly on his axis while another gathered in the slack, like unwinding a reel of cotton,” Thomson said.

Later that day, in the evening, in particular, the traditional items collected were stored in a temporary shelter.

Lovo or earth ovens were opened and all feasted together far into the night.

For four successive days, this ritual was repeated, until the storehouse busted at its seams with collected “property” of food and traditional items.

Thus the novices were made acceptable to the ancestral spirits.

On the fifth day, an immense feast was prepared.

By this time the boys were so weighted with traditional gits on their bodies that they could scarcely walk.

They followed the vere. As they approached the naga entrance they listened in vain for the welcoming chant from inside.

The old vere led them slowly forward to the eastern gate of the naga.

All followed the vere by kneeling and crawling after him on all fours.

Right across the entrance lay the naked body of a dead man, smeared with black paint from head to foot.

“Above him, stretched stiff, with his head upon one pyramid and his feet on the other, lay another body, and under this hideous arch, over this revolting threshold they were made to crawl,” Thomson said.

“Within the enclosure, their hearts turned to water. The dead men lay in rows, smeared with blood and entrails, and over everybody had to crawl.”

At the further end sat the chief vere, regarding them with a stony glare, and before him, they were made to halt in line.

Suddenly he burst out with a great yell.

The dead men rose and ran to wash off the blood and filth in the river hard by.

These were the vere and a few of the vunilolo, who acted out the role of their dead ancestors with the aid of the blood and entrails of the pigs that had been put in the oven.

He was answered by a deep-toned chant, and the vunilolo, now washed, oiled and garlanded, returned with rhythmic step, each carrying a club and a root of kava.

When all are seated in the naga four of the vere came in, the first carrying a piece of roast yam, the second a piece of pork, the third a shell of kava, and the fourth a napkin of native cloth.

The first three put their offering, which was carefully wrapped against contact with the fingers, to the mouths of each of the vilavou in turn, who nibbled the food, sipped the kava, and allowed the napkin-bearer to wipe his mouth.

Then one of the old vere warned them against revealing any of the mysteries to the uninitiated or infringing any of the tabu of the naga. Anyone who went against this went insane and died.

The vunilolo now brought in food, and towards evening the mudu, pigs dedicated years before and allowed to run wild in the area beside the sacred naga, was dragged in and presented to the boys.

The feasting continued for several days, during which the boys did not leave the naga, except to “obey the calls of nature”.

By the sacrament of food and water, too sacred even for the elders’ hands to touch, the boys become vilavou.

A few days after the youths are initiated it was the turn of the women, who had thus far been rigidly excluded, to come to the naga.

The women proceeded to the naga with baskets of food. At the entrance, they fell on their hands and knees and crawled into the enclosure in single file.

The men sitting on either side of a narrow lane left for the procession, and shouting out “Keep your heads down!”

During this performance, it was strictly forbidden for the women to gaze at the men.

In the inner part of the naga the vere matua chanted a song called the vaya.

“The chief vere matua dipped his hands in a bowl of water, and prayed to the ancestors to bless the women, who had come with food, with ample families,” Thomson said.

This ceremony was called the vuluvulu (hand-washing). Thomson said as the vuluvulu was the ordinary form of release from a tabua, the vuluvulu might have been done to forgive the women for entering a place forbidden to them.

As to what happened after this, the native accounts were conflicting.

Former colonial administrator, Adolf Joske’s (also known as Adolf Brewster) informants declared that women only entered the naga to “bring food, and that the rites were orderly and inoffensive”.

However, Rev. Lorimer Fison said that when the women emerged from the enclosure, “the men rushed upon them, and an indescribable scene ensued.

He said men and women conversed in the filthiest language and during the ceremonies “very great licence prevailed”.

Walter Carew, who was resident Commissioner of Fiji in the 1870s, said he was told that in Wainimala the men “rushed upon the women” while they were in the naga.

Any woman who was caught became the captor’s property.

Among the Davotukia district (in Nadroga/Navosa) men could not openly talk about what happened between and women and men in the naga. Many who were interviewed could only giggle.

One frankly said they “did things that they were ashamed to think about in these enlightened days, and, when pressed upon the point, wrote down for me a song of gross indecency connected with the tattooing of women”.

A native of Bauan, who lived for some years near the naga, said that the visit of the women to the naga resulted in “temporary promiscuity”.

“…all tabus were defied”, and relations who could not speak to one another “committed incest,” Thomson said.

“The festival was a propitiatory sacrifice to the ancestors to bless their descendants with increase and the temporary abrogation of all human laws that interfered with freedom between the sexes had a logical place in such a sacrifice.”

On finally leaving the naga all the traditional items collected was carried to the village.

Two candlewood seedlings were set up in the village. The collected items were piled between them.

Those who were not members of the naga were required to remain indoors.

If they caught sight of the “worshippers” they would be inflicted with a strange mental illness.

Meanwhile, the invited visitors, who were in hiding near the village, were now summoned by parties of the “order”, who went out chanting a song to find them.

On the last day, the vere matua shared out the property collected.

A number of the pigs from the collection had their tails removed and were let lose to run wild in the naga to serve for the next annual celebration.

It was an act of reverence to feed these pigs.

To kill a naga pig was “an inconceivable sacrilege”.

It met its death at the hands of an irreligious half-caste, whose continued sanity after this sacrilegious deed was attributed to his foreign parentage.

The ceremony ended with the sisili (or ceremonial bath). All the men went to wash themselves in the river.

The vilavou (initiates) were called together before the vere matua on the river bank and were lectured about “the new position they had assumed”.

They were told to respect their elders, obey the customary law of the tribe, and to keep the secrets of the naga.

They were asked to avoid eating eel and freshwater fish and some other groups of food.

Only until they moved to the next order (the vunilolo) were they allowed to eat these again.