OPINION: Why there’s a need for COVID-19 tests 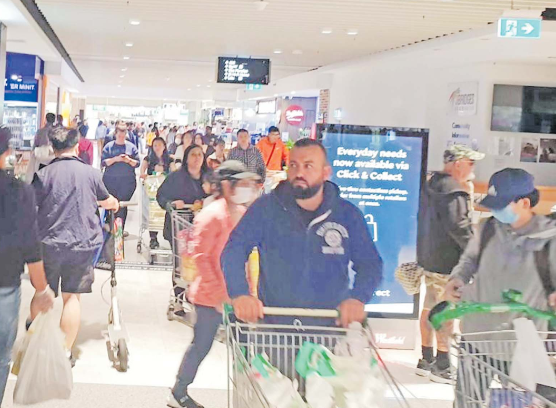 Should shoppers be temperature checked before packing into shopping centres? Picture: ABC/TWITTER

Only about 20 per cent of new Australian coronavirus cases are presenting with signs of fever.

That’s according to the latest epidemiological data from the COVID-19 National Incident Room Surveillance Team, looking at cases up until August 30. A spokesperson for the Victorian Department of Health and Human Services said: “A cough, sore throat, and a runny nose are the most common symptoms of coronavirus we’re seeing at the moment.

“While fever is present in about 20 per cent of patients, older people tend to have fever less commonly.” However, when you crunch the numbers for a larger set of cases presented later in the report, 5866 people out of 12,636 cases had fever symptoms or about 46 per cent, the second most frequently observed symptom in that dataset after cough.

Virologist Tim Newsome of the University of Sydney thinks the decline in people presenting with fever is probably a product of the greater knowledge we now have of this coronavirus and being able to finesse the symptoms we describe with SARS-CoV-2, as well as the changing demographics of who’s getting infected.

“I haven’t seen any good evidence that the virus has mutated and is now different from what it was significantly,” Dr Newsome said. Dr Newsome also pointed to the higher rates of COVID-19 testing. “At the beginning certainly, there were constraints on testing. Now we’re testing far more people,” he said.

“So there’s going to be lots of people who are perhaps asymptomatic, perhaps wouldn’t have been tested in the first wave, now given … the number of community transmission in Victoria has exploded, the scale of testing is drastically different.”

A normal body temperature is about 37C. Start heating up much beyond that and you’re entering fever territory. You might assume that the higher your fever, the more unwell you will be, but that’s not actually the case. Someone can have a 38.5C fever and be really unwell, whereas someone else can have a temperature of 41C and not even look sick.

Although if you’re running that warm, you’d expect to have a lot of other symptoms as well. A fever is a symptom of an illness, not the disease itself. In the most basic terms it’s your body’s inflammatory response to a foreign invader such as coronavirus. For children under two, fevers can also lead to fits or febrile convulsions which can frighten parents.

If you are going to get a fever with COVID-19 it will likely be the first symptom you experience, according to a recent paper. Researchers from the University of Southern California found by looking at more than 55,000 cases, COVID-19 is commonly characterised by fever first, followed by cough, nausea and/or vomiting and then diarrhoea.

Whereas if you’ve got a case of the flu, you’re more likely to get a cough first, and fever later. There was no difference between the order of the symptoms when they compared mild and serious cases of COVID-19. The message remains: Get tested If you’re only going to remember one thing from this article, make it this.

The advice hasn’t changed: if you have any cold or flu-like symptoms, or you’ve been in contact with someone who’s been diagnosed with COVID-19, get tested. Such symptoms, even at their most mild, could include cough, fever, chills, sore throat, shortness of breath, runny nose and loss of sense of smell or taste.

“We’re still on the precipice, and we absolutely need social compliance with that,” Dr Newsome said. And he practices what he preaches. “In my small family we’ve had 13 tests in the last month.”

n Suzannah Lyons is the online science reporter for ABC Science. The views expressed are the author’s and does not necessarily reflect the views of this newspaper.