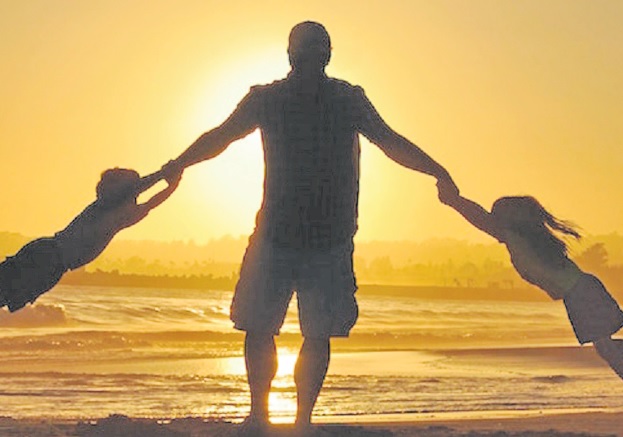 A father plays with his children. Picture: WWWFAMILYTREEMAGAZINE.COM

It might sound a little odd, but my el­dest son calls me dad while my young­est son calls me pop. While their per­sonalities are uniquely different, their values are very much the same.

Unlike my two sons, whom I have a very close personal relationship with, when I was growing up it was different with my dad. Although I knew he loved me it wasn’t easy for him to say he did.

Looking back on his life it was some­what of a conservative upbringing where affection wasn’t easily shown because of the culture and the times they were liv­ing in.

A lot has changed since those days in the early to mid 20th Century where to­day, more and more dads not only show affection for their children in tangible ways, but express it openly with hugs and kisses.

I know I do no matter where we are – whether it’s in a public setting or at home — whenever I meet with my sons they come up and hug and kiss me.

It’s a truly touching whenever this happens and I cherish it and I’m ever so thankful and grateful for their openness in expressing their love. They’re both in their 40s and I also know that both young men express their love for their close friends and family in much the same way.

Growing up, I missed out on receiving lots of affection as a child because my family split when I was five. My nan, who became my surrogate mum, tried as best as she could to fill the void and she did a sterling job.

But it wasn’t the same as having a mum and dad do it. In a way, I grew up a little stunted emotionally not knowing how to express affection and felt a little uncom­fortable about it all.

However, when we got married and had children, I had to learn to change and engage. And I’m glad I did because now when I see my children interact it is such a beautiful and humbling sight.

If the truth be known, their mother has had a huge impact and input in how they’ve turned out. She’s the glue in our family and I’m ever so thankful for her role in bringing up our children with so much love, affection and good values.

Our daughter in law is also a hugger as are our two little grand-daughters. Al­though the older one will give us a five second hug and then chuff off to do her own thing, our little three year old loves to cuddle like a koala.

She’ll gladly snuggle in my lap for as long as I’m happy to have her. I’ve come to realise, physical touching is so impor­tant in the life of every human being to have on a regular basis.

And sometimes, when people don’t have regular physical contact, they can be prone to becoming crabby.

I think if more people hugged each oth­er there’d be less emotional problems in our world. A hug is a kind of emotional and physical validation all rolled togeth­er to say we’re loved and cared for.

Behavioural scientists and experts in the field of human relations and interac­tion have proven through extensive re­search that fathers can have a profound impact on their children and how they’ll turn out later in life.

For example, when a son sees his father interacting lovingly and respectfully with his mother, experts say that these types of young men will also exhibit sim­ilar characteristics when they marry and have their own family.

I’ve also come to appreciate when chil­dren see their parents joyful and content­ed, it gives them a sense of peace, stabil­ity and confidence. Because like it or not, children do worry about their parents.

And it stresses children out to the max if they see their parents bickering con­stantly. Most times children will not say a word out of respect or fear of being rep­rimanded. And if the truth be known, it can also affect their school work as well as their mental and emotional well-be­ing.

I endeavour keeping constant contact with our sons and our daughter-in-law on a weekly basis — sometimes, a few times a week especially we also want time with our grandchildren. I’m always interested in how they’re doing and what they’re up to without coming across as being impos­ing.

It’s always a casual, friendly chitchat as I’ve come to know and appreciate the connection I have with my children is vi­tal to their health and well-being.

I believe this line of communication gives them a feeling of being able to open up especially if they’re going through any challenges they might want to talk about. When this happens, I’m always re­minded to listen intently rather than of­fer solutions. Reason being, most times, all they want is an active listening ear.

I have to admit though, my wife’s bet­ter in this department than I am and sometimes she has to remind me about not jumping the gun giving advice when it’s prematurely uncalled for.

From everything I’ve read, the experts also say that having a dad who’s ‘present’ in the lives of his children can also have a huge impact in their future success. Nur­turing and caring for children is as much a part of a mum’s role as it’s a dad’s role too.

Hugging and kissing usually comes easy for mums because they’re built with more of the emotional sensitivities than we’re supposed to have, or that’s the gen­eral understanding.

However, I’ve also come to appreciate that as men, we need to explore our emo­tional sensitivities as much as the ladies. Because it’s usually in the emotional de­partment where some of us can become unstuck.

In the past, talking about men’s emo­tions was taboo. However, times have changed and we’re living in a very dif­ferent world where guys need more emo­tional education and engagement than ever before.

Some men tend to think it’s woosie to even discuss emotional stuff. On the con­trary — it’s vital not only to our health and well-being but to the well-being of everyone around us.

I’ve had to grow into my role as a hus­band and father partly because I didn’t have the best role models. I’ve come to understand we learn most things in life by osmosis — watching those closest to us.

And if the role modelling is far from a positive and nurturing kind, there’s bound to be problems later in life. I’ve read lots of books about how to be a bet­ter husband and father because like most fathers, I started off flying blind and un­aware of what it meant to be a good hus­band and father.

However, over the years I’ve learned and continue to learn even in my twilight years. Because I believe learning stops only when we leave this planet.

May your Father’s Day be up-lifting and joyful knowing that you’re loved and respected by everyone who means some­thing special to you.

n Colin Deoki is a contributor to the opinion column. The views expressed by him are his and not necessarily shared by this newspaper