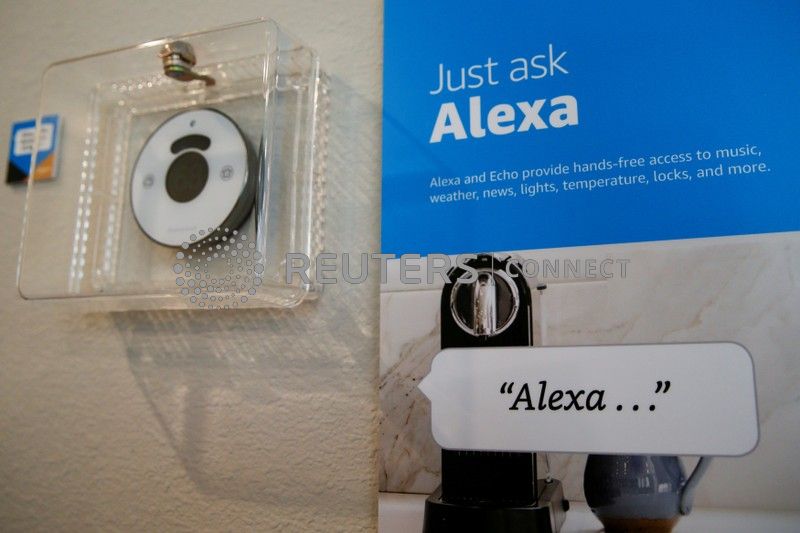 FILE PHOTO: Prompts on how to use Amazon's Alexa personal assistant are seen in an Amazon ‘experience center’ in Vallejo, California, U.S., May 8, 2018. REUTERS/Elijah Nouvelage/File Photo

(Reuters) – Britain’s state-run health service is teaming up with Amazon to provide medical advice for common ailments such as migraines and flu via the tech giant’s voice assistant Alexa, aiming to help more patients at home and cut down on costs.

The plan is to give patients – especially the elderly, blind and those unable to access the internet through traditional means – access to information verified by the National Health Service (NHS) by using voice commands, the government said.

The deal could ease pressure on the NHS by reducing the need to visit a doctor.

It also marks the latest move by Amazon into healthcare following its purchase of online pharmacy PillPack last year and a tie-up with Berkshire Hathaway and JPMorgan Chase & Co in the United States aimed at cutting health costs for hundreds of thousands of their employees.

British Health Secretary Matt Hancock said millions of people were already asking Alexa and other voice assistants about health matters, and he wanted to make sure they received the very best advice in response.

He said the service would be backed by strong privacy rules to protect patient confidentiality.

“There is a clear protocol in place that Amazon has and that we have in the NHS,” he told BBC radio.

The NHS is a cherished institution for many Britons, providing services from routine consultations to life-saving operations. But it is under growing financial pressure in the face of increasing patient demands and budget constraints.

A general practitioner (GP), often referred to as “family doctor”, is usually the first port of call for a person feeling unwell in Britain.

Helen Stokes-Lampard, Chair of the Royal College of GPs, said voice-assisted technology could free up more doctors’ appointments for patients who need them most.

“It has the potential to help some patients work out what kind of care they need before considering whether to seek face-to-face medical help, especially for minor ailments that rarely need a GP appointment,” she said.

“But we must be careful not to create a ‘digital divide’ between those patients who can afford it and are able to use it, and those who can’t.”

Amazon’s Alexa-enabled devices such as Echo and Echo Dot range in price from about 50 pounds ($62) to more than 200 pounds.

The U.S. company’s algorithm uses information from the NHS website to provide answers to voice questions such as “Alexa, how do I treat a migraine?” or “Alexa, what are the symptoms of chickenpox”.

Technology, led by artificial intelligence (AI) and big data, is being increasingly deployed in healthcare.

In India, Practo, founded in 2008, acts as a one-stop shop for patients booking appointments with doctors for online and face-to-face consultations.