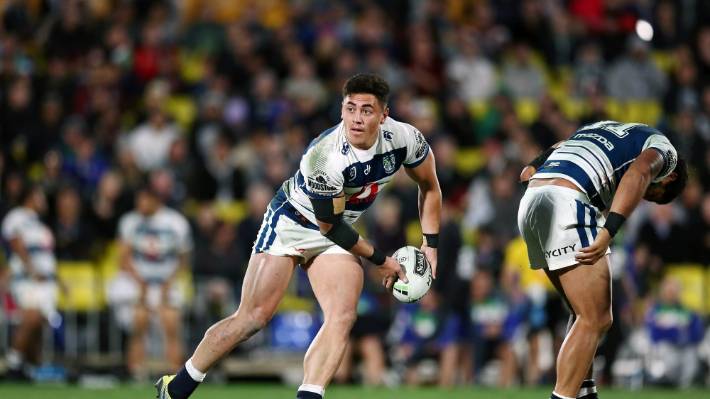 Nathaniel Roache hasn’t played a NRL game for over a year but the Warriors hooker says the club isn’t putting any pressure on him as he nears the end of his final contract year.

Roache burst onto the scene as a 19-year-old rookie in 2016, but has had eight surgeries since and has only clocked up 26 first grade games after a luckless spate of injuries.

The Aucklander tore his Achilles tendon and had hamstring trouble in 2017 and missed the entire 2018 campaign after back surgery.

Last year, as he was beginning to rack up regular games, Roache injured his knee and needed reconstructive surgery. An ankle operation followed, and he’s had a few “annoying’’ muscle niggles since the Warriors relocated to Australia to complete their NRL campaign.

Roache hopes he could be just three weeks away from declaring fit for selection, but is taking an understandably realistic approach.

“If I get to complete three weeks without any interrupted [training] sessions, I should be ready to go,’’ he said in a Zoom media call on Monday.

“But I’m trying not to rush it and trying to listen to my body.’’

Roache said he hadn’t talked to club officials about his future beyond this year, but there was no pressure for him to return to play ahead of schedule.

“What we are really worried about is getting my body right and making sure of the mental side.

“The past three years have been a pretty tough run. My body has been through a lot, and my mind as well.

“They aren’t adding any pressure on me. They are just saying ‘get your body right, see what you can do and if do get a chance to play again, give it your all.’’

Roache said he was not thinking about his future “too much’’, but was just keen to get back to bolster the Warriors this season.

He’s watched Wayde Egan and Karl Lawton play hooker during his enforced absence, and has been supportive of them.

“I”ve had a lot of experience being injured and seeing other players playing. You just have to focus on what you can control. How other people play is something you can’t control.’’

But Lawton’s own recoveries from shoulder injury battles have helped galvanise Roache.

“I’ve been with Karl at the Warriors for a while and to see him get injuries and overcome them and come back even better is inspiring and gives me a little bit of motivation.

Roache said Egan, who joined the Warriors this year from the Penrith Panthers, was “probably one of the silkiest hookers I’ve got to watch’’ and he was learning from him.

“I’m happy that what [Egan and Lawton] are doing is helping the team.

“It does make it a bit harder to get into the team, but that’s the way it sometimes goes.’’

Roache has been taking a positive attitude to his rehabilitation work.

“You do have some days when it’s a bit tougher than what it should be, but then you put things into perspective … you’re still living the dream…’’