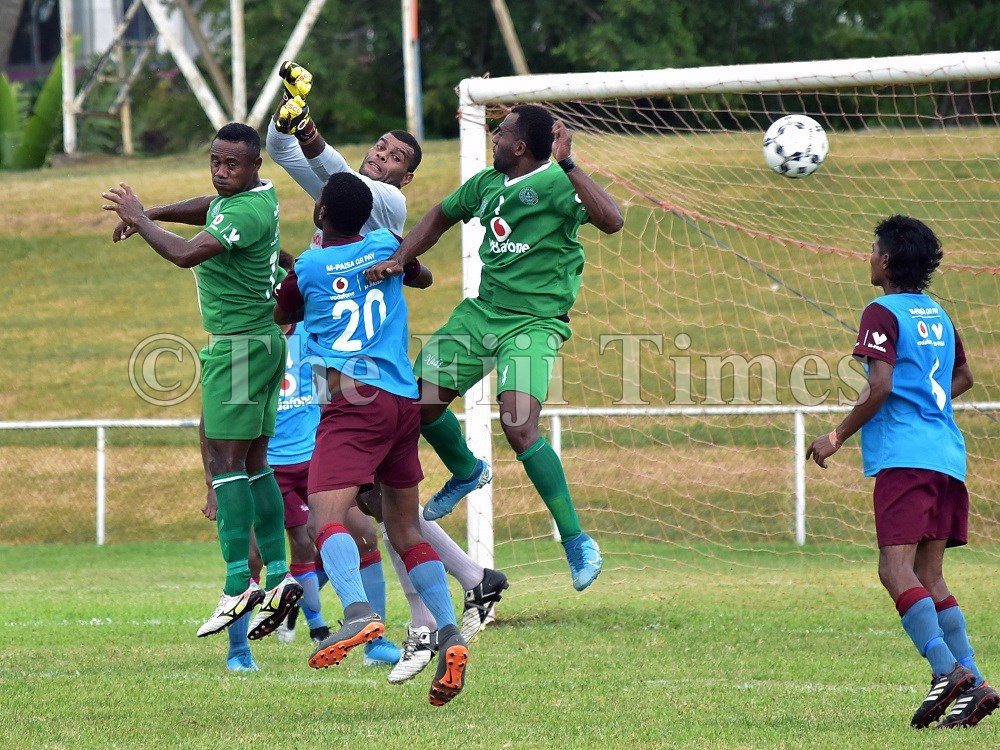 Epeli Loaniceva makes a save for Nasinu against Nadi during their clash at Prince Charles Park in Nadi. Picture: BALJEET SINGH

AVINESH Suwamy put on a man of the match performance as his experience and able leadership marshalled a young Nadi outfit to 5-0 win against Nasinu at Prince Charles Park on Sunday in the fourth round of the 2020 Vodafone Premier League.

A sparsely crowd of 300 patrons watched the derby played in warm conditions, aided by a strong northerly breeze.

Former national representative Avinesh Suwamy who captained the jetsetters, blasted a right footer from the penalty spot in the 22nd minute of the first spell for a 1-0 lead.

Nasinu’s left back Sekove Vakananumi physically pushed Ritik Prakash in the penalty box after the youngster broke free on the right flank, resulting in the spot kick.

The Green Machine took a more offensive approach, however misunderstanding among the player’s at key moments denied the hosts of increasing their lead on numerous occasions.

Nasinu did have their moments in the game as Solomon Islander Jared Rongosulia’s powerful right footer in the 30th minute from outside the Nadi penalty box hit the cross bar and bounced out of play with Dogotuki, Labasa native Vereti Dickson completely beaten.

The second half resumed with Nadi enjoying the breeze advantage from the hospital end of Prince Charles Park and doubled their tally when a powerful instep attempt from the skipper in the opening minute gave Epeli Loaniceva no chance at all.

The onslaught continued as the former Ba midfield maestro grabbed his hat-trick in the 50th minute after Epeli Loaniceva’s diving save from a Ritik Prakash attempt, rebounded in his path; his first-timer saw the net and Epeli’s head shaking.

Vereti Dickson pulled off a great save, diving at the legs of Jone Naraba in the 57th minute to deny the visitors.

He however received a yellow card for time wasting two minutes later.

With a handy 3-0 lead, Nadi were killing the tempo of the game to deny the giant killer’s any opportunity of staging a comeback; on a counter attack the bank officer placed the ball to the left of Epeli in the 80th minute.

Rusiate Matererega scored a goal in the dying minutes of the match for a deserving win; although the score line did not reflect any lack of Nasinu’s enthusiasm in the encounter.

Nasinu missed strike ace Atkin Kaua, who is fast establishing himself as a feared football striker in the local soccer competitions due to suspension after receiving two cautions.

Security was tight and there was no incident of unruly behaviour as witnessed against Rewa last week.