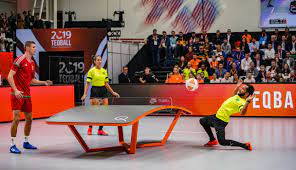 Teqball is a sport played on a curved table. Picture: GOOGLE.

PAGOPAGO, 18 MAY 2021 (INSIDE THE GAMES)—More than 200 people took part in a teqball event organised in American Samoa.

Training sessions and activities were run by the American Samoa Teqball Federation as part of its efforts to boost the sport in the territory.

Most of those in attendance were under the age of 23, with the event possible due to the easing of COVID- 19 restrictions.

The Federation was only formed in March 2020 but has received recognition from the American Samoa National Olympic Committee (NOC).

Twenty teqball tables have been distributed to different parts of the island, which will provide more regular opportunities for people to play.

A summer youth league is planned and volunteers to coach and officiate are being recruited. These will be able to gain knowledge of the sport and qualifications through FITEQ’s online education portal.