Miller scores in OT to lift Canucks past Sabres 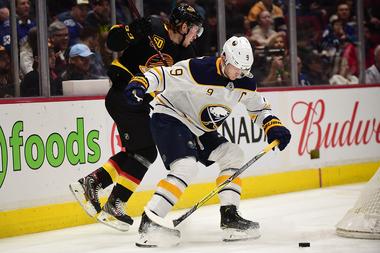 J.T. Miller scored a power play goal with 1:39 remaining in overtime to give the Vancouver Canucks a wild 6-5 victory over the visiting Buffalo Sabres on Saturday afternoon.

With Henri Jokiharju in the box serving a tripping penalty, Miller one-timed a Quinn Hughes pass from the dot in the right circle under the crossbar for his 13th goal of the season.

Josh Leivo and Antoine Roussel each scored two goals and Tyler Myers had a goal and an assist for Vancouver. Troy Stecher and Jake Virtanen both had two assists while Thatcher Demko finished with 23 saves.

Victor Olofsson and Sam Reinhart each had a goal and an assist and Kyle Okposo, Zemgus Girgensons and Marcus Johansson also scored goals for Buffalo.

Jack Eichel added two assists to extend his point streak to a career-high 12 games. Eichel, who has 23 points (10 goals, 13 assists) over that span, also scored his 300th career point with his second helper. Johan Larsson also had two assists and Carter Hutton finished with 24 saves.

Vancouver took a 2-0 lead on goals by Leivo and Roussel, but Buffalo rallied to tie it with two goals in the span of 64 seconds. The first was by Okposo, who was playing for the first time after missing 10 games with a concussion, when he knocked in a Larsson centering pass from in front of the net. Reinhart, with an extra man on because of a delayed penalty, then ripped home a wrist shot from the slot for his 11th goal of the season.

The two teams then traded goals in the final three minutes of the period with Leivo making it 3-2 with a wrist shot from the right circle following an Eichel turnover in the neutral zone and Olofsson answering with his 12th goal of the season on a power play when he one-timed a crossing pass from Sam Reinhart.

Myers, who won the Calder Memorial Trophy in 2010 as the NHL’s top rookie, put the Canucks back in front with short-handed goal, his first goal in 30 career games with Vancouver. Roussel then made it 5-3 with a rebound tap-in of a Virtanen shot, his third in two games since returning from right ACL surgery.