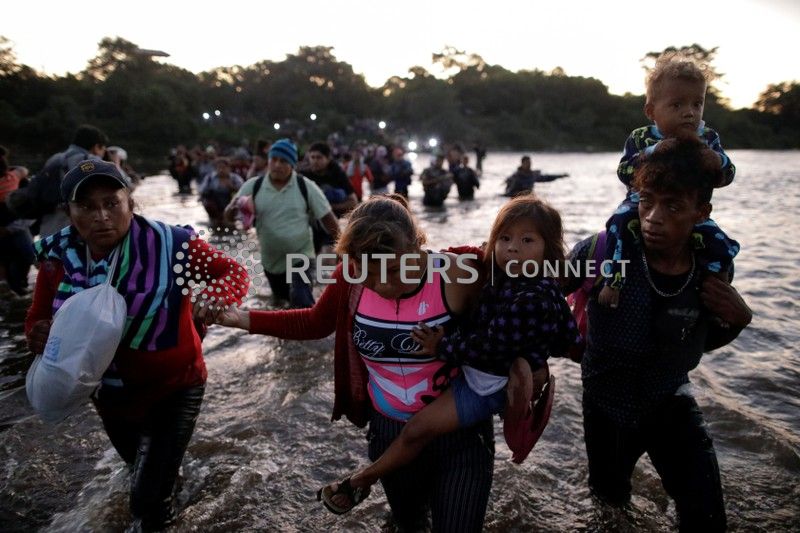 FRONTERA HIDALGO (Reuters) – Dozens of Mexican security forces corralled a caravan of Central Americans who entered from Guatemala on Thursday, testing Mexico’s resolve to contain mass movements of people under pressure from the Trump administration.

Armed with riot shields, a wall of National Guards blocked the path of the migrants and began moving them onto buses after hundreds had earlier in the day swept into Mexico across the Suchiate River that divides the country from Guatemala.

Television footage showed at least two large buses filled with migrants moving out the near the town of Frontera Hidalgo. It was not immediately clear where the buses were going.

Some of the migrants in the caravan had been given forms to seek asylum with Mexico’s tiny asylum agency, COMAR. Many of the Central Americans migrants heading north say they are fleeing economic hardship and violence at home.

Most want to reach the United States. However, U.S. President Donald Trump has pressured Mexico to adopt more restrictive measures to reduce the migrant flows.

The current group is the largest surge of people to test Mexico since its president, Andres Manuel Lopez Obrador, and some Central American governments, made various agreements with Trump to reduce pressure on the U.S. southern border.

Trump has threatened to punish Mexico and Central American nations economically if they fail to address the migrant flows.

Migrants crossing into Mexico earlier this week faced tear gas from security forces, who delivered a firmer response than in previous mass crossings of the border.