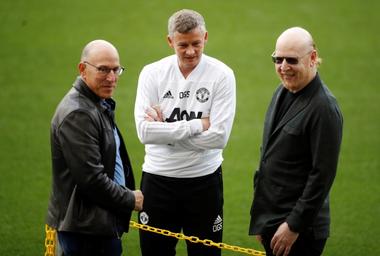 MANCHESTER, England (Reuters) – Manchester United’s Champions League qualification hopes suffered a blow with a 2-0 upset at home to Burnley in the Premier League on Wednesday, as the Old Trafford fans vented their anger at the club’s U.S. owners.

Goals from Chris Wood and Jay Rodriguez ensured victory for Sean Dyche’s Burnley on a night when United looked nothing like a ‘big six’ team.

United fans chanted protest songs aimed at the Glazer family, who have owned the club since 2005, while their team fell to a second straight loss.

After Sunday’s defeat by leaders Liverpool amid criticism of the club for failing to secure any new additions so far in the January transfer window, there is an air of crisis around United.

The club’s decline since the departure of manager Alex Ferguson after their last Premier League title in 2013 shows no signs of being reversed and the fans clearly put the blame on the Glazers and their chief executive Ed Woodward more than manager Ole Gunnar Solskjaer.

Yet the Norwegian accepted that he was “responsible” for what happens on the field and admitted it was not up to expectations.

“Tonight wasn’t good enough for a Manchester United team. We have got to hold our hands up and say it wasn’t good enough,” said Solskjaer, who is without key players Paul Pogba and Marcus Rashford through injury but hopes for some new faces.

“We are working to improve and get players in and hopefully we can get something over the line — I think everyone can see these players are being stretched, they are stretched,” he said.

Thousands of fans flooded out of Old Trafford well before the end of the game while the hardcore supporters in the Stretford End chose to stay and continue to make their feelings known.

“(In the) 84th minute I saw people get up and go. That is unheard of at this stadium. Seeing people leave with disdain on their face. It is an embarrassment. The downward spiral in seven years has been remarkable,” former United defender Rio Ferdinand said in his role as a match pundit for BT Sport.