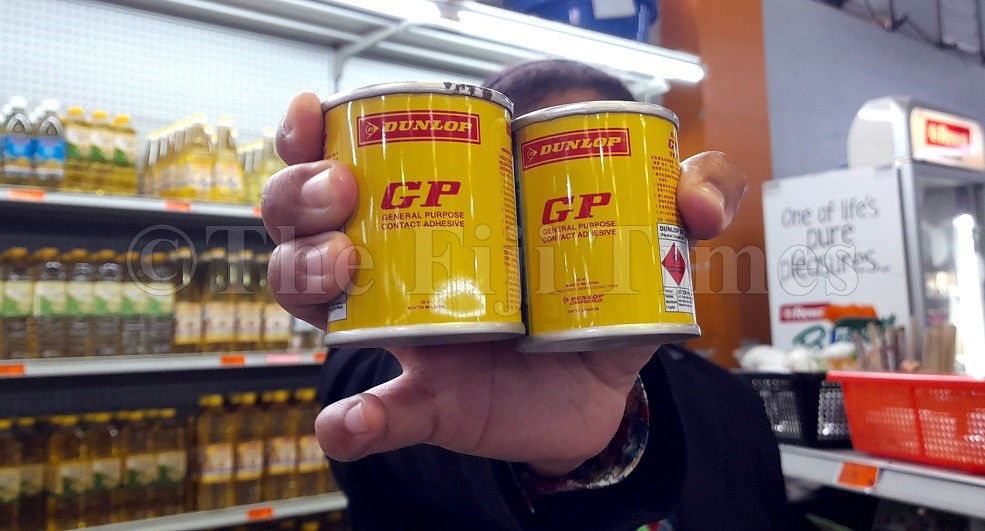 A hardware outlet owner said the glue people used for sniffi ng was only sold to people of a certain age. Picture: SOPHIE RALULU

A Suva market canteen operator says youths looking to buy glue to get high, tell him they indulge in the activity because it makes them feel good.

Sairusi Bogitini said the glue called ‘GP’ was used by shoe repairmen located near his canteen and youths would often pester them for cans of it.

He also said they often forced him to try “sniffing”.

“I often see young children coming to the men repairing shoes and asking for glue and sometimes they ask me,” the 25-year-old said.

“They claim they want it to repair their shoes, but we know the real reason. The children look like school students, but they come looking for glue in normal clothes.”

Mr Bogitini urged parents to be responsible and to ensure they monitored the whereabouts of their children at all times.

He suggested that parents set clear times for when children should be home after school.

Shoe repairmen near the Suva bus stand said street kids were always asking for glue from them.

“Before we used to have school students coming to us requesting glue to fix their shoes or to do other things, but now, it’s mostly the street kids,” a shoe repairman who spoke on the condition of anonymity said.

“We have not seen them sniffing glue but three to four times a week, we see police officers taking groups of people who are holding bottles of glue. It is not a good thing and we need to make youths understand it affects their internal organs.”