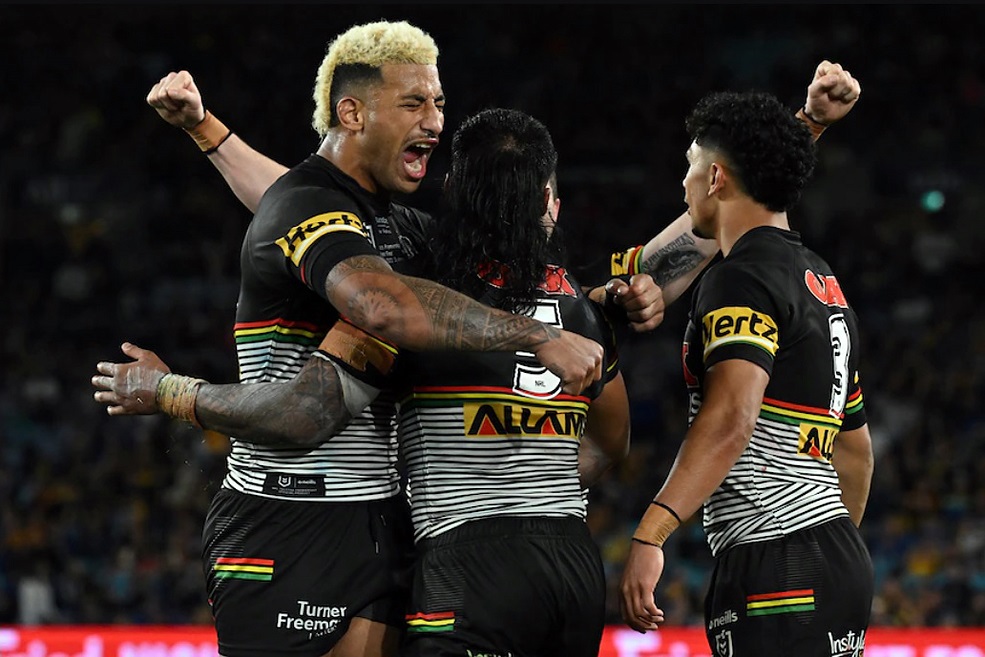 THE NRL excitement was overwhelming. Nerves had started to kick in as the Penrith Panthers were one game away from back-to-back premiership glory. The Parramatta Eels were one game away from ridding the burden of a 36-year drought that they carried on their shoulders. However, history, age, experience, and previous match-ups meant nothing and it came down to the showdown. The Panthers, as expected, were favourites. They beat the Eels in the qualifying round 27-8, but the Eels won the regular season games 22-20 and 34-20. In the qualifying semis, the Eels thrashed Canberra 40-4 and in the semis the Panthers walloped the Rabbitohs 32-12, while the Eels slipped past the Cowboys 24-20. On Sunday night, enormous hype surrounded the Eels as the possibility of breaking their 36-year title drought loomed, but first-half tries to Stephen Crichton, Brian To’o and Scott Sorensen, all of which were converted by Nathan Cleary, catapulted the juggernaut outfit to an 18-0 half-time advantage, quickly sinking the hearts of Parramatta fans. The Panthers matched the Roosters teams of 2018 and 2019 in seizing back-to-back premierships. Their mastery and incredible depth culminated in their NRL success. RAJNESH ISHWAR lINGAM Nadawa, Nasinu

Not news at all

THANK you Rajend Naidu for your letter and begging the question: Why hasn’t our Government listened to Dr Fiona Riddle of the Pacific Islands Pacemaker Services, whose service to Fijians for two decades has seen no changes to CWM Hospital’s infrastructure? I believe for about 20 years she has advocated for this, even writing to authorities. Plain to the naked eye, if you have stayed anytime in the past few years at the CWMH (I was treated excellently in a FEMAT hospital at the CWMH car park) during the COVID-19 pandemic 2021 for about 10 hours. Great care, that is not the issue. It’s not only “madua and disgusting”, as Jioji Cakacaka says, (4/10 FT), but yes, it says volumes about any Government not caring enough about our most vulnerable population in society: the sick, the young and the feeble. This continues to be appalling. When are they going to fix it? JEAN HATCH Taunovo

I DO not have a problem with any political party which is multi-cultural, multi-racial and which promotes gender equality, inclusiveness and is representative and reflective of the makeup of the wider population. I do have a big problem with political parties or indeed any organisiation which promotes policies for only one section of the population. I believe such parties are clearly not democratic and even the thought of such parties forming a government upsets me. My views are not based on any scientific research — just common sense. Why can’t the rest of us have some common sense? I think one of the objectives of the 2013 Constitution was to not have one-sided political parties. Provisions such as calling all citizens Fijian, banning political party names in the vernacular, stipulating that the common language be used in Parliament, et cetera clearly promotes multi-ethnic and multi-cultural participation. But unfortunately, the reality is not as it is supposed to be and that is only because we have recycled old “fossils and dinosaurs” with old fashioned ideas whose only objective is to turn the clock back. And how will such parties get into government? Only when the ill-informed “Facebook dopeys” vote for them. JAN NISSAR NSW, Australia

THE Rooster Chicken-sponsored Fijiana 15s team took part in the welcoming ceremony of the RWC 15s tournament. The side was in high spirits and looked confident as they made their presence felt in the Land Down Under. Going in as the lowest ranked side, the side is capable of beating South Africa and France, but the Roses from England will be tough clients. The side has a solid team management, but an area of concern — which was highlighted during our warm-up matches against the Sakura, Wallaroos, NZ Maori and Canada – is our scrum and line-out – two crucial elements of the game, and if the Fijiana matches the standards of their pool opponents, we are in for a treat. As we count days to the battle against England, it is important to remember the side in our prayers and thoughts. All the best to Seruvakula and the side! RAJNESH ISHWAR lINGAM Nadawa, Nasinu

Day for the elderly

THE International Day of Older Persons is celebrated every year with messages, love and treats. We should also be mindful of the difficulties they face in this modern world of latest technologies. The impact of the environment with climate change, pandemic and other global crises continue to make independent living complicated for them. Many of us are well blessed with children and grandchildren to guide us to use these magic box machines to move on. However, there may be some needing help. I feel there should be more awareness programs and training for them to use these devices to manage day to day living. It’s not uncommon to fall into a trap when they fail to press the right button at the right time. It’s challenging for them to live independently in this world. Your cellphone is your camera and calendar, your alarm clock is your wake up call and your loved ones are your remote control. Best wishes and happy older persons day!  God Bless you all. TAHIR ALI Hamilton, New Zealand

THERE is a saying, that goes something like this. Always do, or take things in moderation, whether it’s the way you live your life, or the way, or what you eat in your diet. Always try to strike a balance, between going without something completely, and taking things to extreme, or excessively. The optimum place is in between, taking everything in moderation. So when you do things to an extreme, you will only suffer the consequences. EDWARD BLAKELOCK Pacific Harbour

THE mother of all soccer tournaments, the Courts Inter-district Championship kicks-off in the Capital City today. Defending champion Labasa is pooled alongside Rewa, Lautoka and Ba, while Fiji Fact champion, Suva, is pooled alongside Nadi, Navua and Nadroga. On the opening day, Nadroga will rub shoulders against neighbours Nadi, Navua plays neighbours Suva, Lautoka battles neighbours Ba and Labasa faces DPL champion Rewa. The battle will be tough, and the results will have a huge outcome on who qualifies from the two pools. The Lions are going for a hat-trick, while Suva, Ba, Lautoka, Nadi and Rewa will aim for a shot at the holy grail. Nadro and Navua, although have inexperienced squads, will not be push overs. On paper, Labasa, Rewa, Ba, Lautoka, Suva and Nadi have power-packed squads and one of them is bound to win the title. However, I’m placing my bets on the Babasiga Lions to complete an IDC treble. My best wishes to the Babasiga Lions and the voice of football — Raymond “The Great” Stoddart! Red fire! RAJNESH ISHWAR LINGAM Nadawa, Nasinu

OUR rugby 7s team and management that won the recent 7s Rugby World Cup in South Africa and the Tokyo Olympics 2020, both deserve a medal each for their sacrifice and sheer dedication. They brought smiles on the faces of many Fijians. JIOJI M CAKACAKA Tadra, Votualevu, Nadi

WHILE I struggle to piece together simple letters these days, political parties are able to compile numerous pages of letters. I guess, a daunting task for the SOE to read through so many pages. Just wondering if the next one would be more than a hundred pages. MOHAMMED IMRAZ JANIF Natabua, Lautoka

BILLIONS in loans but an expatriate doctor reminds us of how run down the two main hospitals are. DAN URAI Lautoka

SUVA will be a hype of activities with football IDC starting from today leading up to the long weekend. What a coincidence when we have two public holidays and this football tournament together as well. Fans will have much more time to cheer for their teams as they will get an extra non-working day and they don’t have to rush after work. May the best team win when the dust settles on Monday. PRANIL RAM Votualevu, Nadi

THAT’S confusing and disturbingly funny. On the way down, it has always been Yarawa Street, but a new sign 50 metres down, at the bottom says it’s now Park Road. Which is it? What are the addresses of houses in that short road? No wonder there have been a lot of accidents in this area, as drivers are confused where the’re at and should be going, on reaching there. EDWARD BLAKELOCK Pacific Harbour

THE next generation of rugby is on show in Fiji at the moment. Despite the live television coverage, the stands have been jam packed. On the other hand, young soccer enthusiasts had their big tournament some days ago. What was the attendance like? MOHAMMED IMRAZ JANIF Natabua, Lautoka

WHICH other country has its attorney-general under bodyguards? What’s the message intended here? DAN URAI Lautoka