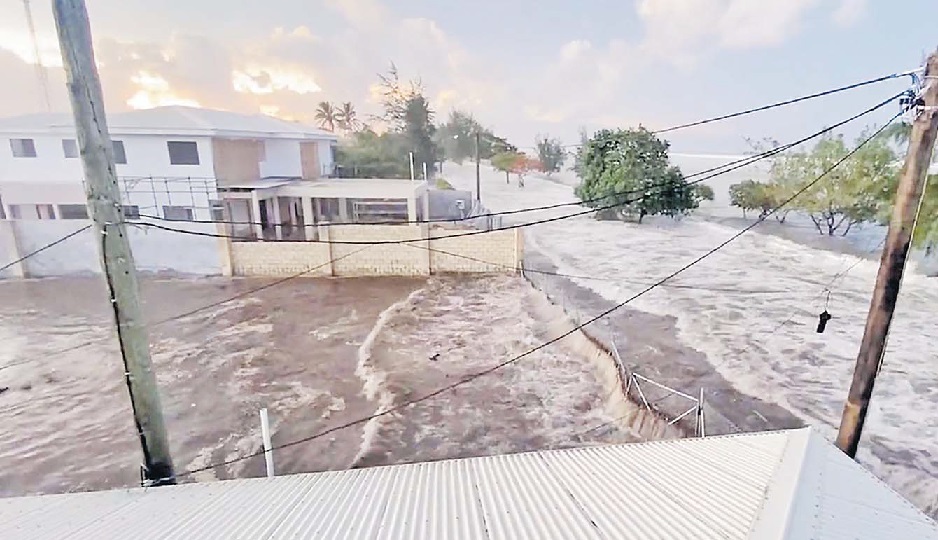 Tsunami waves break the banks of a residential area in Tonga. Picture: TWITTER

On Saturday afternoon (15/1/22) we were out the back yard fishing in the dogo about 4.30pm. We had earlier heard the supersonic loud booming sounds reverberating above us, but wrongly assumed it was crashing thunder typical of this season. It did remind me of the loud rumblings before earthquakes in NZ too.

As my husband was pulling in his handline, suddenly a vast moving torrent of water came crashing up the dogo, cracking and breaking branches, as it rapidly rose about a metre above the tide mark, spreading throughout the whole dogo area, against the current tide. As it gradually subsided, again it rushed up, repeating every 5 minutes or so.

Bewildered, we decided to drive over the bridge to Taunovo Bay, just down the road, where we found a group of local villagers gaping at the sea, like us, as turbulent waves swirled and churned, spinning their fishing boats round and round like small helpless tops in the bay.

The waves kept hitting into the shore by the road, in front of the village above the high tide mark, and shooting down the river mouth estuary to the dogo.

Luckily, these fishermen had not got into their boats as planned. Obviously, something strange was happening.

Two hours later we got the NDMO warnings about the Tongan tsunami on our phones. We had just experienced this!

So I agree with Ronnie Chang, (FT 17/1/22), tsunami warnings in Fiji need to go out much sooner than this. It’s incredible more fishermen and other civilians were not caught out due to delays.

Our prayers and hearts go out to the entire Tongan community. How truly terrifying for their nation, in spite of the wonder of a new island being formed. We are all duly reminded how very insignificant we are indeed, before the might of such creation. Jean H Hatch Taunovo

Tongans had to flee for safety after the underwater Hunga-Tonga-Hunga- Ha’apai volcanic eruption on Saturday afternoon.

For many Tongans, it was the first time for them to experience such a terrifying and horrific event. The rumbling sounds from the volcano were scary, and the sounds drove fear in Fijians as well. The tsunami, which hit Tonga’s largest island Tongatapu, caused windows to rattle and houses to shake.

Hence, tidal waves crossed the Nuku’alofa shoreline and coastal roads, and flooded properties. The eruption took place in Tonga, but its impact was also felt by the residents living in the Lau Group and those living on Kadavu.

Saturday evening turned horror for Tongans and Fijians living in Tonga, and I pray for their safety and wellbeing.

I feel for Tongans, who are here in Fiji and are worried about the safety and welfare of their loved ones — they are in our prayers and thoughts.

Nature has just shown us how devastating a tsunami is. It will be interesting to read about what caused the volcanic eruption.

Shifting tectonic plates, climate change? Or was it just waiting to happen. There have been many COP meetings, will it stop the wrath of nature.

Cyclones are getting stronger, floods are devastating. Usually scientists predict such things. And what about the animals, did they act in unusual ways.

Our main concern post-volcano eruption in Tonga is to proactively address the situation by assessing if there is still active reaction under the ocean that can create more eruptions.

We must not sit on our laurels or apply the reactive approach.

Thank you New Zealand for stepping in and this is the opportune time to action as a lot of classroom theories, seminars summits organised.

It’s time for action, after all leadership is an action not a position.

We look forward to global solidarity to this action for and in the Pacific.

Prepare for the worst

I’ve heard that Tonga and its people are facing serious threats from the volcanic eruption that took place.

Threats that cause a lot of damage to not only the environment but the whole community. I am writing this letter concerning the fact that we should be prepared for whatever may happen.

There are many dangers out there we might face and a lot of things are gonna take place. To avoid these threats, we must follow all protocols that were advised by the authorities.

Even if by means of leaving everything behind. I suggest that we all should now start preparing ourselves for the worst outcome that may possibly occur.

I’m again very disappointed at the slow response of the NDMO to our maritime islands especially in the Lau Group of islands after the tsunami warnings from Tonga.

If it wasn’t our own effort in trying to contact our families and relatives in our home islands, they did not have any idea at all of what was happening in their outside world.

The NDMO disaster response communication policy if any, may look good on paper but I believe it lacks the practicality component at the community level.

We live in a digital era and most things are at the press of a button.

Even at midnight still no siren on both the two main islands and how would someone expect it in our remote maritime islands?

It’s encouraging to read COVID test positivity remains low as confirmed by Tourism Minister, Faiyaz Koya (FT editorial 15/01/22). It’s further said the Omicron case spike is not because of opening international borders, the only way for the spread of virus.

We all Fijians have a role to play to control this. It’s our challenge.

In the wake of natural disasters beyond our control, we should team up with the Disaster Management team following all the protocols with patience and care for our safety.

There he goes again about his so-called Mickey Mouse 7s rugby (FT 16/1). Jan Nissar’s joy in Fiji no longer going to the “useless” tournament in Spain.

Jan, you keep talking about putting money where one’s mouth is and keep firing cheap shots from Sydney. We in Fiji, all know about the Spain 7s tournament.

Let me remind you, 7s rugby in any form puts food on the table for thousands of Fijian families.

How much guts do you have to support these families financially in any other form?

In, the meantime, we dedicated Fijians are praying for the recovery of our Prime Minister Voreqe Bainimarama and the people of Tonga. Jan, pray for the surging number of COVID-19 cases and deaths in NSW. Oops!

You don’t believe in prayers and have better things to do, mainly regarding South Seas Club in Lautoka.

Walk the talk Jan Mohammed, put whatever money you can for a good cause and I will cooly double it up. Kaise baat? Raymond Singh Marine Drive, Lautoka

We were encouraged to get vaccinated. There were two jabs. Many people thought that was it – two jabs and you are safe.

Then along comes the booster shot. Will that be the last or will there be another shot.

What will it be called? Bolster shot? Allen Lockington Kava Place, Lautoka

I can feel Sue Cauty’s palpable frustration (FT 16/1) in her letter ‘Reading again’, where she bemoans the fact that of the 46 letters in the Saturday (15/1) issue of The Fiji Times, only two addressed the “appalling state of literacy in Fiji”. In my defence, I would like to say that I started to write several times but my efforts were deterred by the frequent and intermittent power outages.

But Ms Cauty will perhaps recall that I have been very vocal about this critical matter continually over the last decade.

As a matter of fact, I have spoken about it with the last two Ministers of Education and offered some excellent suggestions which, incidentally were adopted by a premier school district in the SF Bay Area where my daughters went to high school. (Yes, they are still called high schools in every other country in the world). My suggestions were rebuffed by both ministers.

When the last minister proposed that boxing should be introduced in schools, I figured it would be futile to pursue my ideas as they were geared towards brain improvement and not brain damage. And we seemed to have contradicting priorities.

Now that a new minister has taken this important portfolio, I am hoping some sensible ides would be implemented. Or the irony of Things Fall Apart by Chinua Achebe will not be lost on those who have an interest in improving the standard of education in Fiji.

One of them is Colin Deoki who frequently expresses his concern about the standard of education and makes great suggestions.

I wish more parents would take keener interest in the academic welfare of their children. My father, who had to leave school when he was in grade 4 because his father could not pay his fees, would buy me books, insist that I go the library and make sure that I listened to the BBC news every morning so I would improve my English and also know what was happening in the world.

Now most parents have smart phones where they waste hours on Facebook and on social media and would have a more in-depth knowledge of who Kim Kardashian’s new boyfriend is rather than what subjects his son is weak in.

I am glad there are people like Fred Wesley, Colin Deoki and you, who continue to work tirelessly and unselfishly to improve the lives of people.

Sadly my enthusiasm seems to be waning as my efforts keep falling on deaf years.

But then I remember the story of the young man walking on the shore trying to save the starfish and it inspires me be like Sue Cauty – even though most times, if it seems like a lost cause. ARVIND MANI Nadi