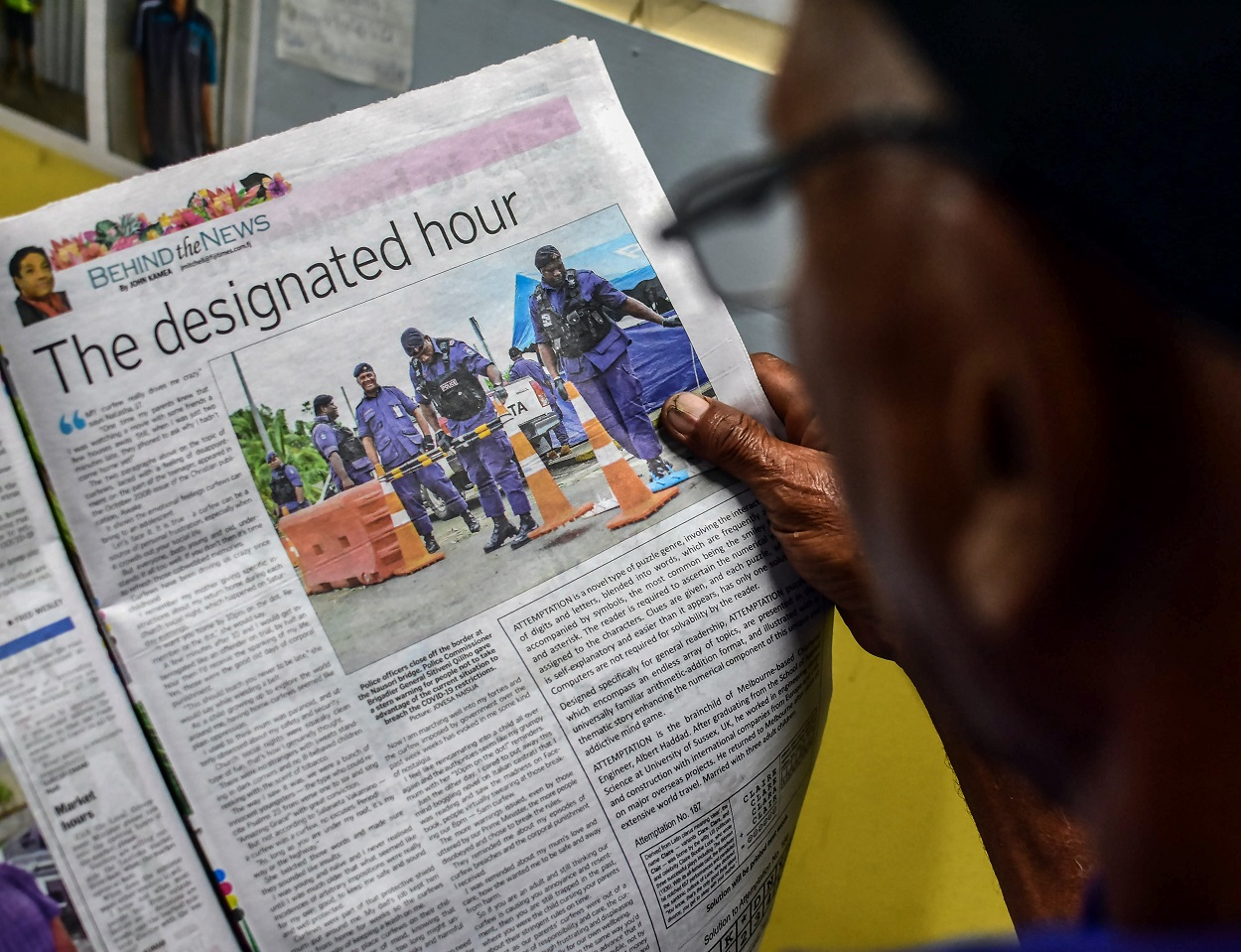 A reader browsing through the Sunday Times 'Behind the News' article in Suva. Picture: ELIKI NUKUTABU/FT FILE

Headlines in the Times

I REFER to the letter by Bharat Morries ( FT 21/10) asking why opposition political leaders quite regularly find their way to The Fiji Times front page headlines accompanied by big pictures.

Mr Morris, my two cents take is that they attract readers like me to know about important issues concerning
our beloved nation.

Maybe from the Government’s point of view, questions sent to the top hierarchy mostly remains unanswered
to deserve the front page.

On the other hand, can you ask our good Government why government advertisements do not appear in the most popular- The Fiji Times?

My priority at the moment is to see front page headlines given to WOWS Kids Fiji, a non profit charity foundation for children with cancer in Fiji.

I am with them all the way to fundraise.

I conclude with John Kamea’s piece (FT 17/10) — Fijians are not looking for people with money and fancy promises.

Now, more than anything, they are looking for leaders that listen, have honesty, empathy, and understanding.

Elections past and present

HOW good to be reminded of the days when general elections were full of fun and excitement.

They were something to look forward to, to feel fully involved in, and to enjoy.

Now elections are boring, involving long queues to get one’s voter card the correct colour (!) and possible expense to get one’s name on the card as the Supervisor of Elections wants it to be, never mind that it is my name, not his, and it should be our own choice as intelligent women voters.

Then, on election day, we are forced to queue up again with no happy gatherings to join while we wait.

No wonder many of my women friends say they won’t bother to vote.

Does this fit the Supervisor of Election’s plans?

THE two nominees for President received 28 and 23 votes respectively (FT23/10).

It will be of interest to know who was the Opposition MP who voted in favour the government nominee.

IT is evident from reports that there are a lot of health problems associated with climate change.

To list some are heat related deaths, food insecurity and hunger, infectious diseases to name a few.

Both young and old are vulnerable as the heat exposure takes its toll.

New diseases emerge which is more sensitive and deadly.

There is huge increase in bacterial growth in our coastal areas.

Mosquito borne illness are on the rise.

Air pollution is at its peak.

One wonders what our future holds.

Without interventions nothing better is possible for our future generations.

Let’s join hands and protect our beautiful mother nature for the good of all.

Do the right thing before it’s too late!

WHY should common citizens like me and my generations to come pay for a loan which we do not have a say in like the Fiji Airways additional loan through tax?

I believe it’s only fair to confiscate and withhold all assets and properties of those that support and approve
this loan in Parliament should anything go wrong with this financial arrangement.

I BELIEVE those Opposition members who do not want Fiji Airways to succeed better not travel in that airline when they travel locally or overseas.

Or else that would make them first-class hypocrites.

But “there is no firstclass on Fiji Airways”, I hear you say?

I BELIEVE the only way to improve Fiji’s ratings from 83rd position is a government change.

FIJI has been pretty dependent on aid.

During a grog session one of the boys said, “Well, the way things are going on, we read about all the loans.

“The B Boom is nowhere to be seen.

“Fiji is now not the way the world should be, soon it will be Fiji kerekere Islands.”

HAVE we even begun talks on wheelchair friendly buses.

We are fast approaching 2022 and I’m sure our folks who are wheelchair bound, would appreciate a joyous ride in the bus, free for all strains.

THANK you to Richard Naidu for enlightening us on some serious election-related legislation about which we, the voters, have not been offi cially informed, unless it was so quietly announced that I missed it.

Now I understand why every time Biman Prasad speaks in public he seems to be complaining or criticising, what else can he do?

He can’t make any creative suggestions for improvements as they would undoubtedly cost money and that is now obviously a very riskybusiness.

How can any elections under such conditions possibly be considered free and fair?

IT seems to me that parliamentary sessions will remain incomplete without the mention of Suva lawyer Richard Naidu.

Despite never contesting a general election, I think he is able to be part of debates in the august House through his comical, thinking and writing skills.

YOU get the distinct impression from lawyer Richard Naidu’s article ‘Promises, promises …

No even one of these can jail you’ (FT 23/10) that the electoral regulation overload in Fiji’s post-coup “true
democracy” is a far cry from the ancient Chinese philosopher Lao Tzu’s prescription for good governance: Governing a great nation is like cooking a small fish — too much handling will spoil it.

That apparently is the case in Fiji’s “true democracy” according to Richard Naidu’s analysis of politics in today’s Fiji which seems to draw more from the Chinese communist state’s style of governing.

THE LTA chairman has clearly expressed negative sentiments as regards motorists in the article “LTA upset with the rise of disobedient motorists” in your edition of Friday 22/10.

He then condescendingly lectures motorists to plan their journeys.

There are a few things that the chairman can do to relieve these unbecoming behaviour:

1. Slow or stop the further importation of cars into Fiji. Even animals overcrowded in cages will behave in a manner quite different from their normal. The real estate that is called roads is increasingly getting overcrowded due to these
continual injection of cars and other vehicle types. Behaviour the chairman is witnessing is a result of this overcrowding.

2. Adopt small changes, that together will optimise traffic flow on our roads and which would grant some measure of relief to the congestion that give rise to these behaviours. For example (a) put up Keep Left Unless Overtaking signs which unnecessarily create pockets of congestion due to slow drivers on both lanes and moreover slow traffic down unnecessarily. (b) put up “Left Turn On Red Permitted, After Stopping” signs to keep traffic flowing. (c) allow right turns after an initial time delay before the right Red Arrow light is switched off. (d) In The Fiji Times of Nov
19/2020, I had an article calling for the removal of the speed hump in Tamavua Village adjacent to the village church which I had identified as the cause of the daily afternoon traffic jam back to the Reservoir Rd roundabout. Finally, as for the chairman calling for journey planning to be adopted, that would be practical if it were not for the never ending unplanned roadworks that sometimes pinch off half the road or even worse the unplanned police roadblocks,
that when those manning it are asked as to reason for them, “E caka tiko na qaravi tavi” is the retort from iTaukei police newbies or “This is from the boss” from those of Indian descent. Either way they do not seem to have a clue as to why they are inconveniencing the very constituent they ought to be helping. So Mr Chairman, between the little
things I have identified and the removal of roadblocks, we motorists say, we will behave, the question is; can you deliver; which we very much doubt seeing that you cannot even open up a gate, for access to LTA services in Valelevu, (and which I had also called for in an earlier article) adjacent to the Nausori side bus stop.

ONE wonders what is happening in the Early Childhood Education (ECE) sector?

Are the kindergarten teachers communicating with children from their classes?

Do the teachers prepare work for them?

What exactly are they doing towards the educational advancement of kindergarten-aged children?

The Ministry of Education website has only supplementary work for Grade 1 and higher.

When there is talk of school resuming, there is no reference whatsoever to or consideration towards kindergartens and ECE.

ECE, as always, is more like an uncomfortable truth yet in speeches; at symposiums and conferences; in planning and policy documents; and from the mouths of our leaders, the early years and specifically young children are seen as ‘mataniciva’, or ‘humare moti’ a pearl and something to be nurtured and treasured.

According to the former permanent secretary for Ministry of Education, National Heritage, Culture & Arts, Youth and Sports Filipe Jitoko, “the worth and the value we place on our young ones should surpass the most valuable pearl tha can ever be found!”

The operative word is ‘should’.

I can’t see much evidence of support by the Ministry of Education for young children of kindergarten years and ECE generally.

Female at the helm

COULD we have a woman as the president?

In the next term, perhaps?

In the next general election, perhaps.