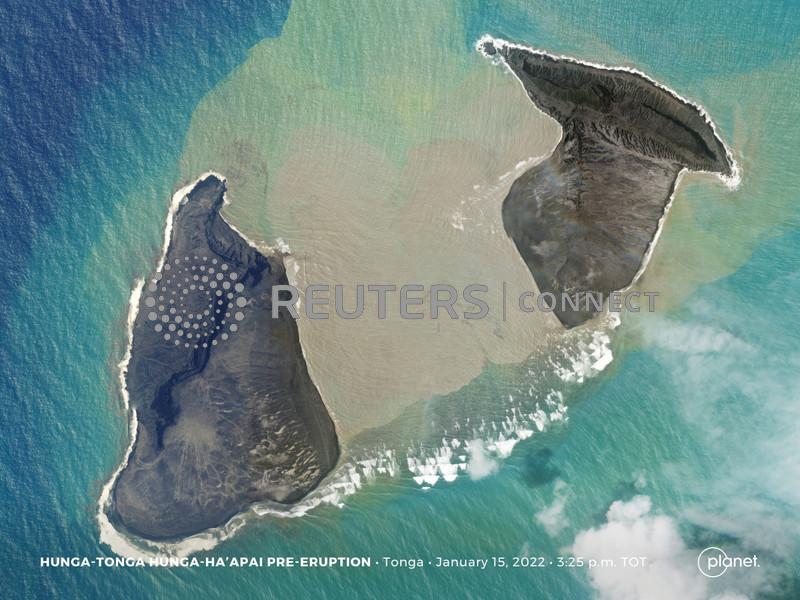 OUR hearts and prayers go out to all Tongan families as the volcanic eruptions underwater and the inevitable tsunami warnings brought shivers.

Another cruel example of climate change and an early reminder in 2022 on what lies ahead.

Let’s continue to remain vigilant focus and Fiji should take heed of these warning signs with greater awareness and more tsunami drills should remain paramount.

Tonga is not very far away and the rumbling sounds experienced on Saturday is a cruel reality.

The stakeholders and every person in Fiji must remain alert as the anger of the sea and the rumble of the mountains are not new.

Our prayers with everyone in Tonga and more so the Pacific.

Keep alert, save our Pacific.

A VOLCANIC eruption has caused a tsunami, the waves hitting the kingdom of Tonga.

We here in Fiji pray for their safety and speedy recovery during this crisis.

May God bless Tonga and keep them safe.

IF a very destructive tsunami occurred in the Kingdom of Tonga, it would take no more than two hours to effectively cover Fiji’s shorelines.

Our official dissemination of such vital importance to the public, at large, must be finetuned to greater perfection and haste.

Warnings must go within a few minutes of any official warning through mobile phones.

Over one hour, in my view, it will be far too late and game’s over for too many.

Precision of timing is paramount.

Anything more is absolutely futile and worthless in my view.

As your true and caring kai Nadi, this is my two cents take in a life and death scenario.

No offence to all our learned officials who “try” to keep us safe.

Please take very careful note – in an open ocean, a tsunami travels at a mind-boggling speed of 500 miles per hour or 800 km per hour (the speed of any modern passenger jet).

However, as a mere novice, I stand to be corrected.

RECENT news from the Ministry of Mineral Resources is that the volcanic activity in Tonga will not cause any direct effect in Fiji.

Earthlings have been evacuated to higher ground.

We have not heard from other maritime islands.

As we sat with social distancing,

on Saturday afternoon outside Smithyees.

There came a series of sharp booming sounds,

that made us all stop and look around.

something very different about it,

Did not sound like thunder and no lightning, sounded kinda explosive.

The sky was relatively clear, with only wisps of clouds here and there.

What may have been thunder, was actually a volcanic eruption on Hunga, in Ha’ apai inTonga, seven hundred kilometres to the east.

That distance made it a real beast.

A tsunami alert was later given, but seawater had already inundated Tonga, Lau and Kadavu coastal areas.

Our prayers, we send to those directly affected, by tidal waves that may have caused some damage.

I’M all for a business making a profit.

Profit margins mean that a business is able to survive and sustain its operations and when a business begins to show a good net profit it has the wherewithal to grow and hire more people.

In a way it’s a win/win/win/win where the company prospers, the employees and their families benefit, the customer enjoys great products and service and the country’s economy gets a boost.

However, when a business begins price gouging and profiteering from a catastrophe or national disaster than that business is not a business.

It’s an unethical operation masquerading as a business that’s exploiting the hopelessness and vulnerability of people as a means of making exorbitant margins.

Is it happening in Fiji?

You bet it is!

The regulatory response by the relevant authority should enforce the appropriate anti-price gouging statutes so that others aren’t flouting the law and taking advantage of vulnerable Fijians.

FANCY talking Tourism Minister, Faiyaz Koya stated (FT 17/1 – P2): “The time for lockdowns – targeted or otherwise – and other heavy-handed policies is past.”

He continued, “from a health and economic stand point, such measures would be self-defeating”.

Out of the blue

ALLOW me to express my sincere thanks and heartfelt gratitude to Iva Tora (The Sunday Times, January 16, 2022).

At his request, November 04, 2021, interview begun with Professor Brij Lal.

Guess he silently knew then his number was up and he beckoned to his master and creator’s calling.

A true son of Tabia, Labasa, Fiji is truly at rest now, with the LORD his GOD – totally free from all earthly hates, vindictiveness and all indecency to allow him home, one last time.

Life, on Earth can be very cruel, hateful and challenging.

It can sap every ounce of decency from any peace-loving human being.

You are in a far better place.

THERE is something strange about Fiji and time.

On Saturday night, the government press conference did not start on time (again).

Then on Sunday morning, I found the time on my mobile phone to be different by an hour from the actual time (not for the first time).

Surely, the volcano eruption in Tonga and subsequent tsunamis have no relation with timekeeping in Fiji.

Maybe, it is a time virus and the immunity level is deficient.

Does the situation require “jabs and boosters”?

I don’t know and hope this is not a mistimed query.

I URGE people not to rely on fake news and rumours.

There seems to be a lot of fake news and rumours on social media and FB.

Unfortunately, people don’t only share such news, but take the news seriously.

DID you hear the tale of the Marie Celeste?

DO you still look forward to the COVID-19 news releases from Health Ministry?

By the way, on a daily basis, I come across many people who are coughing.

SO children have a minimum risk of getting the virus, why close the schools.

WHY is Rewa milk powder being sold for more than $7 in Labasa.

WHY teachers from non-flooding places are to report to work?

Why can’t they work from home as well until the weather improves?

Some of them also have children and they also get affected in one way or another.

Some people find a certain minister entertaining, but they forget that they are puppets on a string.

Isn’t that obvious with all those terminations and resignations.

We need a government where those ministers can feel free to make a stand and call the shots and they won’t be undermined or mocked at.

With this Government, everything may seem as entertainment.

LONG time former French Polynesia’s president Gaston Flosse says he is in mourning because the French State has signed his political death by banning him from political office for five years for abusing public funds (FT 15/1 pg 44 ).

Instead of mourning, the former president should reflect on his abuse of office which was upheld by the highest appeals court.

We recall former French President Nicolas Sarkozy was sentenced to a year in jail for corruption and influence peddling for his 2012 election campaign.

That’s how the rule of law is applied in a true democracy.

No one is above the law.

Flosse needs to come to terms with that and stop moaning!

THE outpouring of support for the prime minister on social media was amazing.

Even those who talked bad about him just said: “Get well soon”.

Some said it’s the best time to retire from politics and enjoy life with family.

THE A-G has publicised the fact that our PM had undergone an urgent medical procedure in the Land Down Under and I wish him well while he recuperates.

(So that’s where he has been all this while, keeping the distressing public in the dark).

Just out of curiosity, was it not possible for the PM to pursue medical treatment locally at one of our top notch health facilities?

Imagine the significant amount of taxpayer dollars that could have been saved.

And is Voreqe Bainimarama still entitled to his whopping $3000 daily allowance while receiving health care abroad?

I vividly recall our articulate A-G once proudly stating that Fiji is equipped with one of the best hospitals and medical professionals in the Pacific.

He obviously hasn’t set foot at the Lautoka hospital yet, I assume.

Despite his somewhat contradicting assertions, the A-G himself flew to Singapore last year for curative purposes.

Oh well, I believe the perks of being Fiji’s PM or Attorney-General has its own glamour.

You can virtually hop into or even charter a local aircraft and hover to any preferred destination to seek medical care while thousands of Fijians desperately queue up to a gruelling four to eight hours in the hospital’s outpatients department just to be attended to by an inexperienced “google” doctor.

You are Fiji’s messiah.

One senior matava, travelled all the way from the West, from a village afar, to Suva for his new specs.

At the optometrist he had to pick, the right frame for his new glasses.

But he did not want it too thick, settling on a thinner one for Christmas.

It almost emptied his once heavy wallet, but he had no other option.

He then walked slowly down towards the market, for the express bus to the Lautoka bus station.

Tucking his new specs safely in his back pocket, to be taken out at his destination.

When he finally arrived at home, Alas! he found it all broken.

In a senior moment during the bus ride, the glasses in his back pocket, was entirely forgotten.

He had sat on the specs, throughout the whole journey, slowly crushing it, when he shifted his body, many times during the trip.

He now quietly rues that day, when he had unknowingly, thrown his hard-earned money away.

Now he has to wear his old one.

It won’t do any good for your vision, maumau walega na ka vou.