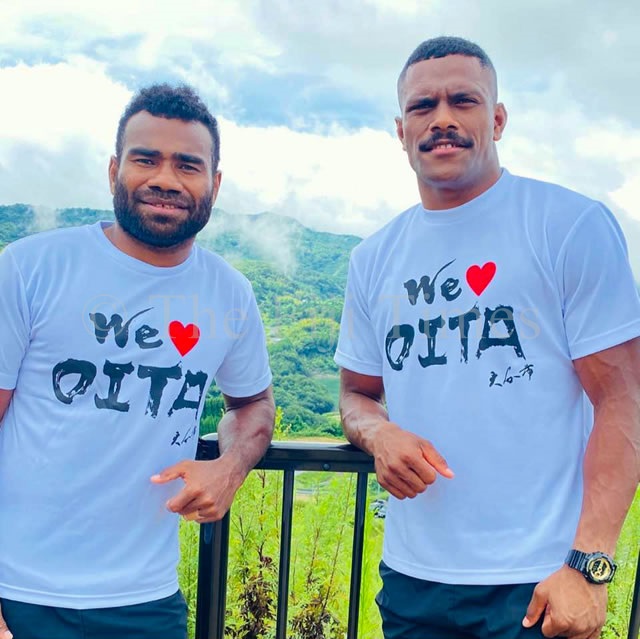 READING Jiuta’s story in yesterday’s The Fiji Times creates a sense of emotive feelings. It is inspiring and motivating how Jiuta from a humble beginning transformed himself to be part of the gold medal Olympics team and now set to join French Top 14 club Toulon. His characteristic moustache, charming appearance and running at full pace to score tries is so exhilarating to watch. He has a long way to go. I am sure his next target will be the Flying Fijians 15s team and participating in the World Cup. Jiuta, go you good thing! PRANIL RAM Votualevu, Nadi

SENIMILI Bradburgh and her dedicated and passionate Kaila! newspaper team – Ana Madigibuli, Siteri Sauvakacolo and Sophie Ralulu deserve a round of applause for working hard to ensure that we have a copy worth reading. Interesting articles were published in this week’s Kaila! newspaper, particularly the “Kite flying adventure”, “A 7-step homemade kite for the children” and the “pros and cons of downloading apps”. It’s good that The Fiji Times continues with the publication of the Kaila! newspaper, as our children have interesting articles to read on a weekly basis, and they’ll be motivated to do worthwhile activities. RAJNESH ISHWAR LINGAM Nadawa, Nasinu

I FIND so much wisdom in the appeal from the Momo na Tui Vitogo Ratu Wiliame Ratudale Sovasova for Fijians to unite and work together instead of inciting messages of hate and violence (FT 5/8). Condemning hateful messages and comments on social media he has asked every Fijian to respect one another and to follow the law and respect the laws of the land. The outspoken chief has once again stood tall exerting great statesmanship in the greater interest of the country and its people. His call for disagreements to be resolved through talanoa should be respected by all parties. In fact I believe if this process was followed before enacting the changes it could have diffused the situation we are in today. The chiefs have already expressed their disappointments against the way the amendment was passed without proper consultation. But they have not shut their doors for further dialogue on this issue. This again demonstrates their ability to exercise their sagacity in dealing with such issues. SELWA NANDAN Lautoka

THE road condition at Borete Rd in Nadawa, Nasinu has been in a bad state for quite a long time. Repairs have been done to this road but not to the required standards as we always notice when repairs are done, only loose gravel is filled into the potholes. During heavy downpour these gravels are washed away and this has been a routine repairs for this portion of road over the years. I appreciate the works done by FRA in repairing other roads and I just hope during this new fiscal year, Borete Rd in Nadawa will also be given some priority for its repairs.JUKI FONG Nadawa, Nasinu

THE National Federation Party, who once relished immense support from the South Indian and Gujarati communities, rightfully asserts to be the oldest party in Fiji’s political circles (FT 5/08). Yet sadly, I believe they were never successful in winning the past national elections with an absolute majority, let alone forming government and leading the nation since the party’s inception some 58 odd years ago. Will the winless streak continue in the next election? NISHANT SINGH Lautoka

MY open letter to the stakeholders FRU and anyone in authority, please stop the movement of specialist and homegrown talented 7s players to 15s rugby. We have seen in the past and in the present the yawning impact it has on the players’ game no matter how big a star you are. Take a look at New Zealand’s gamble of using Caleb Clarke to switch to 7s. He was missing in action. Our own Tuimaba and Botitu such a class 7s players now we can see the struggle. New kids on the block Maqala and Wainiqolo, such raw talents that exploded in the Oceania and Olympics are now our latest 7s exits to 15s. I agree it is a financial issue that is a major factor but if we are to save our 7s talent, we need to think fast, be innovative, and make decisions on how to retain our 7s specialists.  Kerekere can we talanoa and stop the tanoa now please. Veilomani! SHALWYN PRASAD Mukta Ben Place, Nabua, Suva

THE “Enola Gay” armed with “Little Boy” for Hiroshima flew out that historic day an atomic bomb to deliver. Memories never to be erased 6 August, 1945, another day of infamy a city in Japan was that day razed destruction and fatalities came so quickly. The “Bock’s Car” then took the “Fat Man” to be detonated in another city above the surface of the land on 9 August, 1945, in Nagasaki. On 15 August, six days later there was the inevitable capitulation and the signing of Japan’s official surrender changing the course of that proud island nation. Today, under Japan’s post – war constitution a defence force exists to defend its homeland but without the jurisdiction to fight wars and conflicts in other lands. Those countries who once were war-time adversaries are now close peace-time allies and bilateral partners no longer deadly foes or bitter enemies working together for global peace and security for everafter. Japan is now the host to the Olympics despite facing another bitter enemy in the form of a coronavirus pandemic that can be as devastating globally. Despite facing many adversities natural and wartime disasters and all even a pandemic bringing calamities but Japan remains steadfast, proud and tall. EDWARD BLAKELOCK Admiral Circle, Pacific Harbour

CONGRATULATIONS to our history-creating men’s and women’s 7s rugby teams in the 2020 Tokyo Olympics in Japan. On the other hand, I believe Jan Nissar of NSW, Australia, watched 50 or so parliamentarians debate on Bill 17, while most Fijians focused and watched live 7s action whereby uniting all Fijians with their fantastic performances. Mr Nissar, you can keep enjoying your popcorn and masala chai in Sydney but onwards, you will receive my “garam masala”. By the way, Kirti Patel, your letter (FT30/7) suggests he was extreme in his writing and now wondering if he is even a human. You offering him to visit South Seas Restaurant in Lautoka where they only cook for humans. Kirti, you can rest assured that this man has been to this restaurant on many occasions pre-COVID-19. From day one, he has been calling 7s rugby as Mickey Mouse and ridiculing our teams and players all along. Mr Nissar, I can confi dently say that when borders open your point of entry will definitely be at South Seas Club. You don’t go messing around with a country boy like me from Nagoro, Rakiraki. I will give you a free tourist ride to Udreudre’s grave and we will both talk about just one topic — 7s rugby as 7 is also my lucky number. Finally, do you have the guts to ask our honourable prime minister not to offer Fiji 7s head coach Gareth Baber a piece of iTaukei land? The PM said Baber had delivered brilliantly after he successfully guided the national 7s side to winning it’s second Olympics gold medal. This, all in the name of Nissar’s so-called Mickey Mouse 7s rugby. For Fiji, ever Fiji. RAYMOND SINGH Marine Drive, Lautoka

IF you look at the COVID dashboard, the circumference of Viti Levu is covered with red dots. It looks extremely worrying to me and I hope the authorities and decision-makers share the same sentiments. Fiji’s recovery from the Delta outbreak feels like a distant dream that would take decades to turn into reality. Cases in the Western Division have started multiplying rapidly. It’s becoming the new Central Division. I had hopes that the authorities would keep the outbreak confined to the Lami-Nausori corridor, while Fijians in other areas would continue with some degree of normalcy. Alas! With such heart-breaking reality shining an unflinching light on our very survival, the Government is more inclined towards reopening the tourism sector. Fiji Airports has recently secured a multi-million dollar finance facility. Why not prioritise the overwhelmed health sector, suffocating under the COVID load. It’s almost impossible to access non-COVID healthcare at any public hospitals now. It’s either not available or it’s simply not safe to go. I strongly believe that no one would want to come to a country with one of the highest test positivity in the world. We need to heal first. We need to prioritise Fijian lives, livelihoods, mental health and national wellbeing. We need to first flatten the curve so Fijians can move without fear of contracting the virus. Stop thinking about tourists coming in, first make the environment suitable for your own people to happily and safely step out of their houses. Please put Fiji first. NADIA NAAZ Ba

I BELIEVE on social media and print media the dashboard has been called a “real-time” or “live” dashboard. However, if you click on the link for this dashboard you will notice that the latest figure given is a day behind. I do not think there is any harm in removing the words “real-time” and “live”. AZIM ISHAK Laucala Beach Estate, Nasinu

WHILE the current pandemic has imposed many challenges in our daily lives, we can draw  some benefits, one of which is that many Fijians have gained wider knowledge in relation to healthy living and the need to exercise good choices in nutritious food. EMOSI BALEI Suva

SOMETIMES we feel we can’t break the law but we can bend it to suit us. A wise man once said: “The end of law is not to abolish or restrain, but to preserve and enlarge freedom.” Unity in diversity is the most powerful tool we all have to solve the most difficult problems. God bless Fiji. TAHIR ALI Hamilton, New Zealand

I BELIEVE politics is an insecure job. When one becomes a politician, he or she will hardly be satisfied and will always be hungry for more. AREKI DAWAI
Suva

I BELIEVE Nadi International Airport needs a new gatehouse to replace the one they removed. Redeveloping the overdeveloped airport with millions loaned from Australia leaves a lot to be desired because it does not guarantee that tourism figures will achieve the million per year arrival target that Fiji has been struggling to achieve. Why couldn’t they use the infrastructure development funds loaned from Australia to build or improve roads to villagers in the interior of Viti Levu, build bridges in villages and settlements where children wade through rivers to attend school every day? Fix roads on Ovalau and other maritime islands. DAN URAI
Lautoka