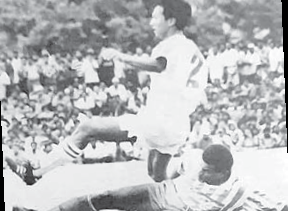 Last week’s 1-2 loss at the hands of Navua has put the Labasa in the danger zone.

The team that made headlines last year after winning the Inkk Battle of the Giants defeating Lautoka 1-0 and the Courts Inter District Championship after defeating Suva 1-0 is in danger of getting relegated. In the Champions vs V Champions series, Labasa held Ba to a nil-all draw in Ba and then upset Ba 2-1 at the Ratu Cakobau Park.

Passionate and patriotic Labasa fans had so much to cheer for. However, the Labasa team is a shadow of what the team was last year as Labasa was dumped out from pool play in the Punjas BOG.

The northerners have struggled in their league matches and will play Nasinu at home.

Thanks to the ‘Voice of Fiji Soccer’ Raymond Stoddart and FBC TV, Labasa fans had an opportunity to watch their boys play against Navua but the result was disheartening.

Who do Labasa fans blame now for our team’s performance- the match offi cials, FFA, the turf or the commentator?

The comments that poured out on the social media from the Labasa fans were uncalled for.

The least we can do is to support the team that gave us thrilling and breathtaking moments last year.

My support is with Rayaz, Master Ronil and the boys — win or lose, I’m a proud Labasa fan. We may be down now but we will rise and today, I take readers down memory lane when the Lions beat Tahiti 3-1 in 1985- a feat that even our national team could not achieve.

I’m sure this article will motivate our fans and team Labasa. The national soccer team played Tahiti in three international Test matches and surprisingly lost all three. Tahiti tasted defeat at the hands of the Babasiga Lions.

In the first outing against Fiji on Thursday night (July 4) in Lautoka, Tahiti won 1-0 and broke the hearts of Fijian fans.

A blunder by 19-year-old Epeli Rokoqica gifted the visitors their second win while in the third Test match, mid-fi eld maestro Ivor Evans, Kelemedi ‘Cheetah’ Vosuga and Isimeli Nale were axed from the team following claims of ‘camp break’ a day before the third international. Unlike the Fiji team, Labasa beat Tahiti 3-1, prior to Fiji’s second and third Test matches, to give many fans a soccer satisfaction.

The Tahiti side travelled to play Labasa at the iconic Subrail Park on Saturday, July 6. Since Tahiti had beaten the national soccer team and had a good winning run against Fiji, many had ruled out the possibility of a Labasa win. The Anand Sami-coached Labasa side played constructive soccer and intensified the pace with which they played.

The one-two passes brought the 4000 fans to their feet as the likes of the late Bai Waqailiti (goalie), Ivor Evans, Epeli and Vula Rokoqica, Jone and Tevita Tukania, Amichand Nair, Johny Williams, Milton Simmons and the late Simon ‘Maradona’ Peters put on a special and spectacular performance in front of their home fans.

Labasa’s opening goal was scored by Vula who netted the opener with a glancing header from a Williams corner kick. However, this joy was shortlived as Thomas Serre equalised in the closing minutes of the fi rst spell but it failed to jilt the home side and attacks continued.

Twelve minutes from full time and Subrail Park erupted in joy as Labasa hit the lead 2-1 with a golden touch from Williams.

Amichand and Simmons played a cool game and held the furious attacks by Tahiti who turned on its viciously charming soccer style but failed to penetrate the defence and the late Waqailiti’s superb work in the goal mouth.

Tukania missed a sitter late in the second spell but the late Peters slid the ball past two defenders two minutes from the end of the game to hand the Lions a convincing 3-1 win.

The Fiji Times news reporter Nalinesh Arun reported that, “Labasa triumphed where Fiji could not, routing the Tahiti team 3-1. In a classy game, Labasa proved it is the best with tactics that upset the visitors. Labasa played their newly-acquired one touch soccer to perfection, outplaying Tahiti who is renowned for that type of soccer.”

As a result of that historic victory against an international team, Epeli, Amichand and Williams got the call-up to play for Fiji in the remaining two internationals. Later on, Amichand moved to Suva and helped the Capital City team win the 1988 BOG with his penalty kick while Epeli and Ivor were recruited by Ba.

On the other hand, 24 hours after ripping Tahiti apart, Labasa smashed Ba 4-1 in the local league. On Saturday May 21 in 1994, Labasa fans had another opportunity to watch the Labasa versus Tahiti match at Subrail Park. This friendly was a build-up to the two-match series between Fiji and Tahiti.

I was in class seven and I joined dad Ram Lingam, my beloved mum the late Pushpa Wati Lingam, and brothers Adishwar and Rohit Lingam from Savusavu to watch the historic match in Labasa.

We had to stand as the ground was jampacked with a sea of red colours. People carried transistor radios to listen to the commentary as that time we had no mobile phones. We did not have the luxury to take a selfi e with the stars then and if we had an opportunity to shake hands with our heroes, we shared the story with our class mates for weeks.

Soccer was in our blood and we cheered our hearts out for Labasa especially when Taniela ‘Bhagwaan’ Tuilevuka led the Babasiga Lions onto the park.

Nardeo Mishra was the referee and his assistants were the late Rudra Maharaj and Ranjeet Prasad.

Tahiti preferred accurate long and short passes and sudden bursts while Labasa played a fast, aggressive pattern using long kicks and hard tackling and the two contrasting styles blended well and produced an exciting match.” Tahiti got on the score board as early as the 21st minute when Reynald Temarii set up the goal for former Chinese youth rep Gong Lei who was one of the most exciting players to watch.

Labasa fans waited with bated breath for the equaliser which came in the 60th minute via the boots of Solomone Catarogo after a pressure from Labasa forced a handling error and the hosts were awarded a penalty.

The Lions missed two classic screamers from the late Peters and Rasoki which were saved by goal keeper Heinis and Labasa held onto the draw and kept their unbeaten run against Tahiti intact. After battling Labasa, Tahiti met Fiji and the heading of The Fiji Times of Tuesday May 24, 1994 read, ‘Soccer reps give away victory in the bag’ as the Rothmans Fiji side let go off a handy 2-0 lead at Suva’s National Stadium. Prolific Nadroga striker Radike Nawalu put his best foot forward and showed why he was Fiji’s deadliest striker as Fiji took an early lead only to throw away its advantage to the persistent French Polynesians who employed a professional approach and scored in quick succession towards the end of the game with goals by Mahenor Samen and Renald Temarii.

I pay tribute to Nawalu who is a good FB friend of mine and is still crazy and passionate about soccer and misses the glorious days when he ruled Fiji soccer with his deadly strikes.

Nawalu played for Nadroga and Suva. The good days of our national team’s success indicate that more work is needed to improve our ranking.

I’m sure our former players will agree with this.

Until then, happy reading and all the best to the Lions for their all important clash against Nasinu!

A win at home will, to some extent, save the Lions from further humiliation.

Rajnesh Ishwar Lingam is a regular contributor to this newspaper and the views expressed in this article are his and not of The Fiji Times.