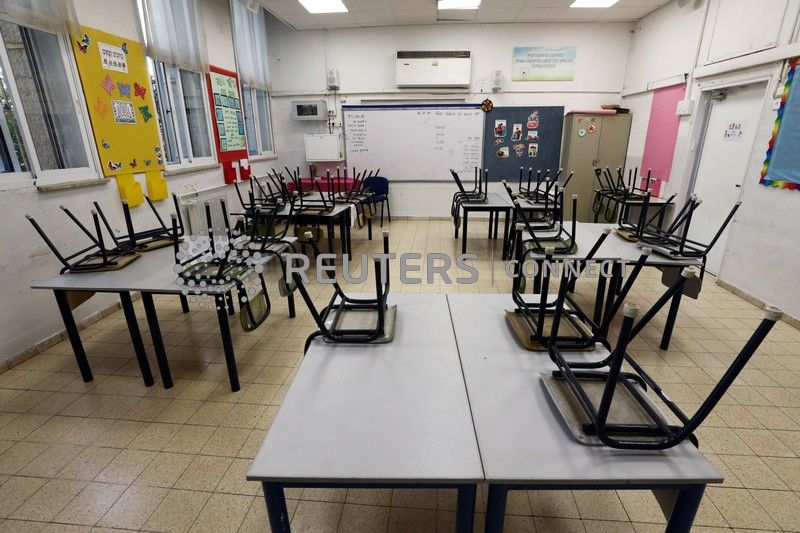 An empty classroom is seen at a school closed as part of a government decision to curb the spread of the coronavirus disease (COVID-19) crisis, a day before a nationwide lockdown begins, in Jerusalem September 17, 2020. REUTERS/Ammar Awad

The initial lockdown was imposed in late March and eased in May, when the number of new cases dropped to about 20 a day. Israeli leaders have acknowledged they lifted restrictions too soon, hoping to avoid further economic damage.

The new lockdown, due to last three weeks, coincides with the start of the Jewish New Year, Rosh Hashana, traditionally a time for large family gatherings.

Teachers shifted to online lessons while children lamented not being able to hang out with friends just weeks after the school year started.

“I began first grade, I met new friends and suddenly corona comes and we have to stay home,” said Aviv Harel, whose family was taking advantage of the last day before the closure with a bike ride in Jerusalem. “Not fun.”

Under the new rules, Israelis must stay within 500 metres (yards) of home, with exceptions for activities such as commuting to work, shopping for essentials and walking outdoors for exercise. Workplaces will be allowed to operate on a limited basis.

Social distancing and limits on the number of worshippers were to go into effect at synagogues, usually packed for Rosh Hashana and Yom Kippur, the Jewish Day of Atonement that begins at sunset on Sept 27.

“It’s mostly frustrating that we can’t do the holidays in a reasonable way, with friends and family,” said Alexandra Gelman, out walking with her son.

Since the outbreak began, 1,163 people have died in Israel, a country of 9 million.

Health officials have cited patchy compliance with mandatory mask-wearing, poor social distancing and infections in close-quarter Arab and ultra-Orthodox Jewish communities and in schools as having fuelled a second wave of cases.

Many Israelis have accused the governing coalition, where cabinet ministers have openly quarrelled about how to deal with the pandemic, of having been slow to respond to the surge.

“We committed mistakes, we made errors, and some of the public’s complaints are truly justified,” Foreign Minister Gabi Ashkenazi, asked about the government’s handling of the health crisis, said on Army Radio on Thursday.